Is NFL next stop for ex-UK walk-on? 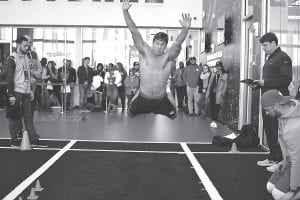 He came to the University of Kentucky with a huge chip on his shoulder. He was a three-sports standout at Louisville St. Xavier but the only way he got on the UK football team was to accept a walk-on offer from then offensive coordinator Neal Brown.

“I thought I deserved to have (scholarship) offers, but not getting them kept me working really hard,” said senior receiver Charles Walker. “I got to play special teams. Then I got in the game at receiver. I realized I was pretty good at football.”

The 5-11, 205-pound Walker kept that chip on the shoulder working for him last week when he participated in UK’s Pro Day — something that probably seemed an unlikely possibility to most when Walker got to Kentucky. 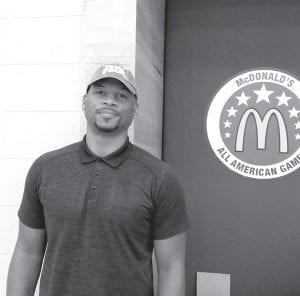 Chuck Hayes is now working as a scout for the Houston Rockets, but he still proudly wore his UK Final Four hat at last week’s McDonald’s All-American Game. (Photo by Larry Vaught)

“I had my sights set for Pro Day. No question about that. I think I am good enough to play at the next level,” Walker said.

He ran the 40-yard dash in 4.5 seconds at Pro Day. He had a 36-inch vertical jump and above average bench press results for a receiver. His shuttle times were also impressive.

His mother, Jane Walker, always worried about him getting hurt when he played, especially after he got to UK.

“She was always a little scared,” Walker said.

She could also get nervous — even during Pro Day.

“She had to leave the facility when I was doing bench press during Pro Day,” the UK senior laughed and said. “Of course, she always thought she had the perfect bench press technique. I can still remember when I was bench pressing in our garage and she would tell me I wasn’t doing it well.”

Several NFL teams thought he did well — very well — during his workouts. The Patriots, Jets, Titans, Lions and Colts all talked to him after his workout.

“The Patriots and Titans talked about my special teams play, what positions I played at times during the season and if I returned punts in games,” Walker said. “I think they were just trying to see what knowledge I had of the overall game.

“The other teams exchanged information with me and told me they liked what I did and that they would be in contact. So overall, Pro Day went pretty darn well.”

Walker didn’t have an agent when he worked out. He wasn’t even sure how the process of getting a free agent contract or invite to a training camp would work. He’s had agents reach out to him and is using UK coach Mark Stoops and recruiting coordinator Vince Marrow to help him through the process

“For me, it’s just cool to see all the hard work in my life and especially the hard work from the last few months pay off for me in the spotlight when all the (NFL) scouts were here,” Walker said. “I showed I could be poised and perform at this level. I can do this.” 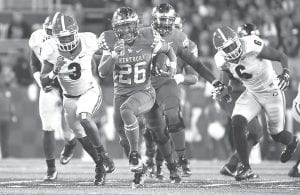 The only SEC players ever to have at least 31 rushing touchdowns and 2,409 yards before his season season are Georgia’s Herschel Walker, LSU’s Leonard Fournette and Kentucky’s Benny Snell. Snell will be the best player on the field during UK’s Blue-White spring game on April 13. (Vicky Graff Photo)

The night before Pro Day, he worried a bit that his career was going to be based on one day’s performance. He knew to have any chance to get into a NFL training camp, he had to use his one chance to make scouts notice him — and he did.

“I was nervous but as soon as I stepped into the football facility I got locked in like I did for games,” Walker said. “I didn’t worry then about doing anything except doing the best I could. I just had to trust my training.”

It helped Walker that he had so many teammates going through Pro Day, too. That gave each player a little more recovery time between events.

“I was almost blacking out at times because I was so tired,” Walker said. “But we were all encouraging each other and if everyone does well, it makes you want to do well.”

Former Kentucky basketball star Chuck Hayes was in Atlanta last week for the McDonald’s All- American Game. He’s now a scout for the Houston Rockets after spending last season in the same role with the Denver Nuggets.

Hayes said he was “evaluating talent and checking out some of the new faces” for the next college basketball season. But he sees a big difference in today’s players than when he was the same age.

“I was not this athletic. I was not this skilled. Today’s athletes are a special group coming up,” said Hayes. “There are no wide bodies any more. It is a long, athletic, lengthy, jumping group out here. I couldn’t hang with them.

“But I am having fun doing this. This is my second year doing this and I am enjoying my job.”

He had a brilliant career at Kentucky playing for Tubby Smith and is in the UK Athletics Hall of Fame.

Hayes is still Kentucky proud, too. He wore his UK Final Four hat from three years ago when he was sitting with other NBA scouts watching the nation’s elite high school players practice.

“I watch UK all the time. I am still a fan through and through. I bleed blue. The guys (at UK) know they have my full support,” Hayes said. “I was wearing this (hat) all tournament hoping it would bring us some good luck but obviously we got cut short (with a loss to Kansas State). I am just letting everybody know what school I represent, and I will always be doing that.”

Hayes was in Lexington in February when Kentucky played Mississippi. He got a chance then to see coach John Calipari and assistant coach Kenny Payne.

“Just stopping by and paying my respects to everyone. Just making sure they all know I still bleed blue,” he said.

Hayes looked fit and trim enough to play with those he was scouting, a thought that made him laugh.

“I am not in that kind of shape,” he said. “But I will say this. I am eating better now that I am not playing than when I did. That’s not the way it usually works, but that’s what has happened for me.”

Vanderbilt signee Darius Garland of Nashville was Kentucky signee Immanuel Quickley’s teammate at the McDonald’s All- American Game in Atlanta but they went after each other during scrimmages.

“We had a whole summer together last year. We went all over the country, went to Italy. It was really fun. We started getting close. He is my guy,” Garland, a 6-2 guard, said. “His intensity, I love it. We are always getting after it and telling each other we are going to get better today. When we step on the floor, we are going to compete.”

Garland admits that he’s already thought about what it will be like to play in Rupp Arena next year against Kentucky.

“We are excited about it. Me and Simi (Shittu) talk about it a lot. It will be fun,” he said.

Kentucky’s annual Blue-White Game will be April 13 and will give fans a chance to how quarterbacks Gunnar Hoak, Terry Wilson and Danny Clark look as they compete to become UK’s starting quarterback.

But the best player on the field for UK will continue to be junior running back Benny Snell.

Even more impressive, he’s just the third SEC player to have at least 2,409 yards and 31 rushing touchdowns prior to his junior season, along with Georgia’s Herschel Walker and LSU’s Leonard Fournette.

“He’s just exceptional,” said former UK quarterback Freddie Maggard, who is now a UK Radio Network football analyst. “He refuses to be tackled. He practices scoring on every play because he expects to score every play. He’s a player I really like because he has a chip on his shoulder the size of Black Mountain back in Harlan County because he was only the 73rd ranked running back coming out of high school.”

Maggard hopes UK will find a dependable backup running back — and maybe a third back it also trusts — to keep from wearing Snell out. The junior won’t complain or ask out, but Maggard says he needs to be able to take breaks at times.

“(Offensive coordinator) Eddie Gran was a wizard last year. He had to change his offense and scheme around (Stephen) Johnson not being able to throw deep,” Maggard said. “They’ve got to find a way to give Benny a break at times.”

Maggard has no doubt Snell will leave for the NFL after his junior season based on what he’s already done.

“The real question now is who would you compare Benny Snell to? Myself, I have never seen another running back do it better than Benny Snell. He’s just unbelievable and I hope Kentucky fans realize how lucky they are to get to see him one more year,” Maggard said.

Quote of the Week: “That’s something I pretty much do. I just love talking, and that’s something you’ve got to do as a point guard. You have to be vocal. You have to be a leader, and people need to feed off your energy,” UK signee Immanuel Quickley after taking just one shot but getting eight assists in the McDonald’s All-American Game.