Is Quickley Cats’ answer at the point? 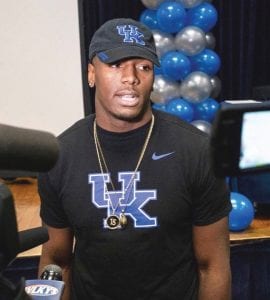 “When you want to talk about freak, that is a freakish athlete right there,” said Robinson, a four-star player and winner of this year’s Paul Hornung Award as the state’s top football player. “That is somebody who is 6-6, and to be that big and move the way he can with a first step like he has, he can do a lot of different things. In middle school, he was a quarterback. In sixth grade he was about 6-3, so just imagine my little sixth grade self catching a football from him and how hard that was coming.”

Weaver, also a four-star player, joined Robinson as a University of Kentucky football commitment last week. Now they will be teammates again like they were for three years in middle school when they played on an all-star football team together.

“Me and J.J. have always been good friends. He would stay in my house when we played in Frankfort so he did not have to stay in a hotel,” Robinson said. “We would just have fun. He was always one of the guys I stayed close with since we played together. We have been in group (text) messages with each other. We have always been that way and it has been really good with him talking about Kentucky. We have always had a good relationship.”

Mercer County coach David Buchanan got to see plenty of Weaver in the Class AAAA playoffs when Moore beat his team. He came away impressed.

“He is a talented young man. He had a really good motor and played hard,” Buchanan said. “He was also very versatile … he could play in the interior, the edge, or at linebacker. He was also effective as a tight end and slot receiver both catching the ball and blocking. They will need to put some more weight on him at Kentucky, but he can run and has a nose for the ball.”

Josh Edwards, recruiting writer for The Cats Pause/247, believes Weaver could make an impact at Kentucky in 2019.

“In the SEC, you generally hope that your linemen can redshirt but he is a strong guy already with good size,” Edwards said. “Defensive end is a position that could still use an upgrade in talent and despite some veteran players at those spots, he should have an opportunity to contribute after he has been in the strength and conditioning program.

“He is a really strong player who explodes off the line of scrimmage. He played both ways for his high school as a defensive end and tight end. His background in basketball has created some really good body control. He is just a special athlete. Beyond his athletic abilities, he is just a really good kid.”

Jeri Maas has a son who is a senior at Moore and she has watched Weaver play numerous times. She shares Edwards’s opinion about Weaver’s personality.

“He is a team player, enjoys the game,” she said. “He is very genuine. What you see is what you get. He is very popular with the other kids in his senior class, very involved in school, and loves his teammates.”

Weaver, who lived in Florida before moving to Louisville in 2014, was very emotional during his announcement ceremony last week and stopped several times when he cried, especially thanking his teammates and mother.

“Just being here at Moore and changing the program around has been great. I like being different,” Weaver said. “We made history at 11 and 2 this year. I will never forget that. Being here changed me in so many ways.”

Marshall County sophomore Zion Harmon is the only Kentucky prep player that has been involved in USA Basketball where he has played against UK signee Tyrese Maxey and UK commit Kahlil Whitney.

“I have seen Maxey play a lot. He is one of the best combo guards I have ever seen, especially in that 2019 class. Really explosive. He plays with rhythm and flow. He will be a good fit for Kentucky,” said Harmon, one of the topranked point guards in the 2021 recruiting class.

Harmon has played both with and against Whitney, who will sign with UK in April.

“He is good. First time I saw him play was in Dallas and he went off and hit like four 3’s in a row, couple of dunks. He is real athletic, can shoot it and he is a hard worker,” Harmon said.

Can Whitney really make a whole gym stop and watch when he gets on a roll?

Nice to see both tight end C.J. Conrad and cornerback Derrick Baity get an invitation to play in the East-West Shrine Game Jan. 19 at 3 p.m. in St. Petersburg, Fla. The game will be shown live on the NFL Network.

Conrad came into the season ranked as one of the nation’s top tight ends. Despite his lack of targets and catches at UK, he’s still among the top five to seven tight ends on NFL mock drafts. Also remember it was Conrad who had the game-winning catch at Missouri and the one who made many blocks that got Benny Snell loose for big gains.

Baity became a shutdown defender for UK this year by dramatically improving his technique, according to UK coach Mark Stoops. He has 34 tackles; seven pass breakups, one interception and one forced fumble.

Linebacker Josh Allen earlier accepted an invite to the Senior Bowl Jan. 26 at 2:30 p.m. in Mobile, Ala., where most of the upcoming NFL draft’s top players will be evaluated by NFL personnel for five days.

Winning nine games was “significant” for coach Mark Stoops’ team and he’s proud that his team overcame adversity at times to do that.

“You’ve got to find a way to win the game in difficult situations and overcome it, adversity and bad plays, and getting nine is a big deal. It hasn’t been done in 41 years and that is significant. They deserve some recognition because they’ve worked hard,” Stoops said.

Olive Branch’s best player is D.J. Jeffries, a one-time Kentucky commit who changed his mind and signed with Memphis and coach Penny Hardaway. Despite some apparent hard feelings over Jeffries’ de-commitment to UK, Rombaugh had nothing but praise for John Calipari and his coaching staff.

“Calipari and his whole staff were always real nice and open. If there is one thing about Calipari, he is open with you. He is not going to keep any secrets. He is going to tell you how it is. That’s how he recruits,” Rombaugh said. “He puts it out front and you either like it or you don’t. You can either handle it or you can’t.”

Rombaugh said Jeffries simply wanted to check other options when he de-committed and then Kentucky coaches opted to look at other options rather than continue to recruit him.

“His situation was not that he didn’t think he could handle it at Kentucky. It was what is best fit for me and my family with him,” the Olive Branch coach said. “He is going to school 15 miles from where his parents and grandmother live. That’s a pretty good situation.

“He played for Penny (in AAU). It wasn’t that DJ didn’t like Calipari or Kentucky. It was just a situation where he was doing what was best for him. Basketball is a small percentage of college. What’s he going to do rest of day, what’s he doing to do at night, who does he hang out with.

“He has to be comfortable and that’s what this decision was based on. It was never based on not liking Calipari or Kentucky. It was just what was best for D.J. and I still have great respect for Calipari and his staff.”

“He’s a great coach and skill developer, but who would want to be his boss,” DeCourcy said when asked about Pitino’s future. “He has not had a boss since C.M. (Newton at Kentucky). He worked with (Louisville athletics director) Tom (Zurich) more than for him.

“I do not know anybody that could feel comfortable that their situation would stay strong if they hired Rick. I don’t think anybody at the NBA level, as good of coach as he is would hire him. When I think of the best coach when it comes to strategy and talent development there is Larry Brown and Rick Pitino and very few others in that group, but I still don’t see a NBA owner hiring him.”

However, DeCourcy knows Pitino likes the spotlight and would not fit what could be his best chance to stay involved in basketball.

“He does not seem to be comfortable out of the spotlight,” DeCourcy said. “If he wants the spotlight, he could be a great TV analyst and commanding personality. But I have not seen any inclination he would want to go that direction but he would be great at it if he decided he wanted to go that way.”

Mark Stoops leaves no doubt how important a bowl game win would be to Kentucky, which has not won 10 games since 1977. That’s a big climb from the roster he took over that won two games his first year at UK.

“We always feel like there is room for improvement and we are going to strive for that. I don’t take it for granted either. I appreciate the work that was put in for a long time. Just staying consistent and steady, continuing to work and build. We have some great people around here and going to continue to strive to do better,” Stoops said.

“You hear 10, it’s signifi- cant. And every win — we only get so many opportunities, so, it’s very important. I felt like we really did some things differently from a year ago. The guys played really hard and we gave it a great effort, and we’re going to do the same thing this year.

“We’ve got a bunch of guys that want to win. So, we’ll try to make sure they’re in a great mindset and we’re going to go in there and give it everything to got to get another victory (in the bowl game).”

How would John Calipari describe himself as a coach? Well, he took a try at explaining what it would be:

“It wouldn’t matter how I would characterize myself. It would be what anybody else thinks,” Calipari said. “It’s probably across the board. At the end of the day, what we do as coaches will be evaluated 30, 40 years from now. Fifty years. None of us will be here.

“They’ll look back and they’ll kind of –- what kind of job did he do with the kids he had? How was he with the program and the state that he was in? You’ll be evaluated. Right now, stay in the moment, keep moving.”

Quote of the Week: “I didn’t ask, and I didn’t care. Once they said that we were the ones they chose, I’m good. Let’s move on. Be thankful and move on. So we’re glad that they picked Kentucky. I would like to think it wasn’t that close. They had a choice. And the fact that they chose our guys and our fans means a lot to us as a department. So whatever it was, their process, I’m thankful,” UK athletics director Mitch Barnhart on UK’s berth in the Citrus Bowl Jan. 1 in Orlando.

Quote of the Week 2: “Those are two of the top, consistently good, powerhouse teams and I’m not going to lie — Minnesota is a really tough place to play. It’s a scary gym. Not being in the Big Ten seeing that every night, I’m not sure how they are going to face them. I wish them good luck, but I am going to be rooting for the Big Ten,” Purdue’s Blake Mohler on UK after playing to play Nebraska and then maybe Minnesota in Minnesota in the NCAA Volleyball Tournament this weekend.