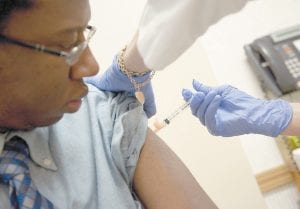 This year’s flu shot will be a duplicate of last year’s because the same flu strains are still circulating. So some experts say young, healthy people may have enough protection from last season’s vaccine to skip getting a shot this fall. (AP Photo)

Vaccine makers said they plan to make a record amount of flu vaccine for this fall and winter — enough for more than half the population. It’s just not clear all those people will need it.

This year’s flu shot will be a duplicate of last year’s because the same flu strains are still circulating. So some experts say young, healthy people may have enough protection from last season’s vaccine to skip getting it again this fall.

“For healthy people, it can’t be said to be necessary,” said Dr. Robert Couch, a flu vaccine expert at the Baylor College of Medicine.

Still, government health officials are urging nearly everyone to get this fall’s flu shot. They say a vaccine’s protection can fade signifi- cantly after several months — especially for those who are frail and elderly.

Five vaccine manufacturers announced plans recently to make between 166 million and 173 million doses for the coming season. That’s at least 6 million more than the maximum ever produced.

It’s quite a bet, considering the flu season that just ended was somewhat mild. But vaccine makers think it’s a good one.

“We are confident in our 2011 projections for the U.S. market. They are based on ordering patterns as well as what’s known about the epidemiology of the flu,” said Liz Power, spokeswoman for Novartis Vaccines, one of the main manufacturers of flu shots for the United States.

Demand for vaccine has been growing in the U.S. More than 40 percent of the population was vaccinated against the flu in the last 10 months, the second year in a row vaccinations were at so high a level. Previously, only about a third of Americans were getting vaccinated, according to government figures.

The Centers for Disease Control and Prevention had something to do with that. Last year, the CDC began recommending an annual flu vaccination for everyone except babies younger than 6 months and those with egg allergies or other unusual conditions. That probably helped boost vaccination rates, along with the appearance in 2009 of swine flu, which was more dangerous than other strains to young people.

The CDC also is buying about 18 million of the 2011-2012 doses, primarily for government vaccine programs for children.

Other countries, even in Europe, do not promote flu shots as aggressively as the United States. Seasonal flu can be deadly, especially for the elderly and people with weak immune systems.

The biggest selling point for an annual shot, usually, is that flu strains are usually different each year. But this year, that argument goes out the window. The last time flu strains didn’t change was during the winters of 2002-2004.

But there are other arguments for getting a flu shot. For one thing, the vaccine is only about 70 percent effective to begin with — and that’s in a good year, when the vaccine is well-calibrated to circulating strains. That’s not good enough to protect the U.S. population for one year, let alone two, CDC officials say.

But the main argument now is one of waning immunity. CDC officials believe that a year after someone gets the flu shot, antibody levels — an indicator of immunity — can fall by twothirds or more. Some key studies indicate the resulting levels are not strong enough to be protective, said Nancy Cox, head of the CDC’s chief of the CDC’s flu division.

However, other studies are less clear. Some have suggested that a flu vaccination can provide suffi cient protection for more than a year in adults, and perhaps two or three years in children.

Cox said some of those conflicting studies are outdated and flawed, and noted more recent U.S. studies that found large drops in children’s immunity in just one year.

Other researchers sound less decided about which studies were right and which were wrong on this question.

“Nobody really, really knows,” said Dr. John Treanor, a flu vaccine researcher at the University of Rochester School of Medicine.

But even if the question is unsettled, Treanor and other experts said the CDC’s position is probably the wisest course.

“The bottom line is, with our current knowledge, we believe it is better to be re-vaccinated. And getting another shot is certainly not going to harm you,” said Dr. Arnold Monto, an esteemed University of Michigan flu expert.