Is Richie going to run for governor in 2011? 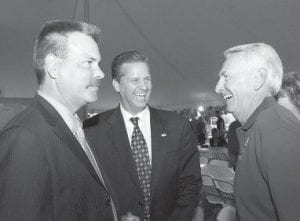 University of Kentucky basketball icon Richie Farmer said this week he is considering a run for governor on the Republican ticket.

The shooting guard on the legendary 1992 UK team dubbed “The Unforgettables” said Tuesday he has been “in discussions” about a possible run.

“I’m looking at options and seeing what people are saying,” Farmer said. “We may look at doing a poll a little later on.”

Democratic Gov. Steve Beshear is the only major candidate who has entered the race so far. Beshear and his running mate, Louisville Mayor Jerry Abramson, have already begun fundraising.

Beshear chose Abramson as his running mate when Lt. Gov. Daniel Mongiardo bowed out to run for the U.S. Senate seat now held by Republican Jim Bunning, who is retiring.

Beshear and Abramson share many political philosophies, including a pro-gambling stance. The governor has been pushing a proposal to legalize slots at the state’s horse tracks to generate more money for Kentucky’s struggling horse industry and to create new revenue for the state budget.

Gambling was a central issue in the last governor’s race and likely to be in the next one.

Farmer said he considers gambling an issue that should be decided by Kentuckians through a ballot referendum.

“I’ve always said we should let the people decide,” he said.

The Clay County native, who easily won two terms as state agriculture commissioner, has widespread name recognition across Kentucky. That “would play in his favor” if he were to enter the governor’s race, said University of Louisville political scientist Laura Rhodebeck.

Rhodebeck said others have used their popularity in athletics to catapult into politics, including Bunning, a former big-league pitcher now enshrined in the Baseball Hall of Fame.

“I think there are plenty of fans who would see it as a real plus,” Rhodebeck said.

Farmer, who is limited to two terms as agriculture commis- sioner, gave no timeline for deciding on the governor’s race.

“I’m still concentrating on being the best commissioner I can possibly be,” he said. “I guess it’s flattering that people would consider you, and look at you that way. But, by the same token, I’m not getting blown away by it.”