Is state ready for heroin surge?

‘We’re having to educate ourselves about it,’ said UNITE’s Dan Smoot

By KRIS KENNING
The Courier-Journal 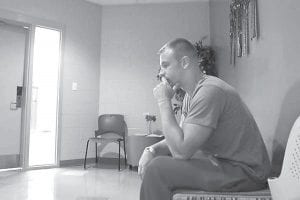 Wes Oetinger started using prescription pills before turning to heroin. He ended up being arrested after breaking into his neighbor’s home. He said heroin is much cheaper than pills and gives the same high. You can watch Oetinger tell the story of his downfall in his own words and the growing heroin problem Kentucky is facing by visiting the Courier-Journal’s website at cjky.it/OjBN4Z. (Photo by Matt Stone, The Courier-Journal)

Wes Oetinger’s drug abuse started in high school, with prescription pain pills from a friend’s medicine cabinet. It got worse when a motorcycle accident left him with a ready supply of opiate painkillers.

And it finally ended last April in a Louisville jail cell, with the 27-year-old fighting through withdrawal, writhing in pain, sweat and cramps from his use of heroin, a notorious drug Oetinger “was sure I’d never do.”

Yet his story is an increasingly common one in Louisville, where police say the use of heroin — a once rare but highly addictive drug — is surging.

In Louisville, the amount of heroin seized by police has skyrocketed from just 104 grams in 2008 to 7,087 grams so far this year. Heroin arrests shot up from 32 to 364 during that time. Police say it’s all over the city but concentrated in the South End.

University Hospital treated 252 heroin overdose patients this year between June and August, up from 116 in the same period a year earlier. And local drugtreatment facilities say they, too, are seeing an increase in addicts of the opiumderived drug.

Although prescription opiate abuse is still a much bigger problem, the heroin trend is “very alarming,” said Karyn Hascal, a vice president at The Healing Place, a local drug treatment facility. “Five years ago you rarely ran into it.”

“That picture of that hippie looking drug user from the ’60s — that’s not the heroin user of today,” said Lt. Col. Kenton Buckner, assistant chief of Louisville Metro Police who oversees the narcotics unit. “He’s educated, he has a job, but can no longer find the pills he or she needs.”

‘Other areas are beginning to see a similar trend. Last week in Jeffersonville, Ind., for example, police said they had arrested a group of dealers selling drugs that included heroin. It’s also present in Northern Kentucky, and beginning to emerge in Eastern Kentucky, where pill abuse has been rampant, state drug officials said.

“We used to have zero heroin … now we’re making street buys. We’re having to educate ourselves about it,” said Dan Smoot, deputy director of the eastern Kentucky anti-drug organization Operation UNITE. “It’s nowhere near what our pill problem is. (But) it’s my belief heroin is going to slowly replace the pharmaceuticals. I see it as the next big problem.”

That’s worrying, said Van Ingram, director of the state Office of Drug Control Policy, partly because it is highly addictive and risky.

Unlike pain pills, which are made in a factory and whose potency is known, heroin can be cut with dangerous ingredients or turn out to be stronger than expected — making it more prone to overdoses.

“I don’t think people realize how dangerous it is. The generation using heroin now doesn’t remember the public education push of ’60s and ’70s, when heroin made its first real surge in the U.S. I think among 20- and 30-year-olds, there’s a gap of information,” Ingram said.

Heroin — which comes in a powder or in tar-like chunks and can be eaten, smoked, snorted or mixed with water and injected — is also more closely associated with diseases such as hepatitis, since users often share needles.

And it is known for taking a heavy physical toll on the body.

Oetinger, for example, who began taking heroin in 2011, said he was finally caught after breaking into his neighbor’s condo to try to steal items to sell and buy more drugs. He’d already hawked most of his clothes, electronics and shoes.

“You know it’s destroying you and everything around you,” he said, but “it takes a hold of you.”

The sheer popularity of opiate pills is driving up the cost, making heroin a more affordable high.

In Louisville, for example, the powerful painkiller Opana was selling on the street for $150-$170 a pill, Buckner said. Heroin, by contrast, was selling for about $25 for one-tenth of a gram, about enough for one dose.

Law enforcement agencies and the legislature have recently made it harder to “doctor shop” for a prescription. Doctors now must use a prescription drug monitoring system, the Kentucky All Schedule Prescription Electronic Reporting, or KASPER.

In addition, drug manufacturers have reformulated some drugs to make them harder to crush, snort or inject to get a high. When that happened with OxyContin, many abusers moved on to Opana, but now that too is being reformulated.

Drug treatment officials in Louisville say few using heroin ever imagined they would. Most try it only after already being addicted to what they thought was harmless.

“We’re seeing young girls hooked on pain pills that they initially think is OK, because it’s in their grandparents’ medicine cabinet,” said Amanda Newton, director of community relations for Seven Counties Services. “But then the supply runs out, they turn to heroin.”

Louisville police say they are putting more resources toward combating the drug.

But while pills often have a manufacturing or prescription paper trail, most of the heroin is coming from well-organized drug cartels in Mexico. The National Drug Intelligence Center says that Mexican heroin production grew from 7 metric tons in 2002 to 50 in 2012.

Buckner said Louisville police have seen heroin come in through California and Texas, where it’s occasionally interdicted through UPS or FedEx shipments.

Theresa Frey, 29, started on pain pills and moved to heroin while in northern Kentucky about seven years ago. She said she would shoot up at gas station bathrooms or even while driving on the freeway.

This report originally appeared in the September 9 edition of The Courier- Journal in Louisville.