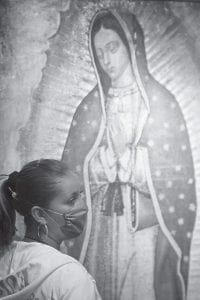 A woman wearing a surgical facemask as protection against a new strain of swine flu stood next to an image of the Virgin of Guadalupe, Mexico’s patron saint, at the Basilica of Guadalupe in Mexico City earlier this week. (AP Photo)

As reports of a unique form of swine flu erupt around the world, the inevitable question arises: Is this the big one?

Is this the next big global flu epidemic that public health experts have long anticipated and worried about? Is this the novel virus that will kill millions around the world, as pandemics did in 1918, 1957 and 1968?

The short answer is it’s too soon to tell.

“What makes this so difficult is we may be somewhere between an important but yet still uneventful public health occurrence here — with something that could literally die out over the next couple of weeks and never show up again — or this could be the opening act of a fullfledged influenza pandemic,” said Michael Osterholm, a prominent expert on global flu outbreaks with the University of Minnesota.

“We have no clue right now where we are between those two extremes. That’s the problem,” he said.

Health officials want to take every step to prevent an outbreak from spiraling into mass casualties. Predicting influenza is a dicey endeavor, with the U.S. government famously guessing wrong in 1976 about a swine flu pandemic that never materialized.

“The first lesson is anyone who tries to predict influenza often goes down in flames,” said Dr. Richard Wenzel, the immediate past president of the International Society for Infectious Diseases.

But health officials are being asked to make such predictions, as panic began to set in over the weekend.

The epicenter was Mexico, where the virus was being blamed Monday for 149 deaths and more than 1,600 cases in the country since April 13. Schools were closed, church services canceled and Mexican President Felipe Calderon assumed new powers to isolate people infected with the swine flu virus.

International concern magnified as health officials across the world this week said they were investigating suspected cases in people who traveled to Mexico and came back with flu-like illnesses. Among the nations reporting confirmed cases or investigations were Canada, France, Israel and New Zealand.

Meanwhile, in the United States, there were no deaths and all patients had either recovered or were recovering. But the confirmed cases around the nation rose from eight on April 25 to 20 by April 26, including eight high school kids in New York

City — a national media center. The

The concern level rose even more when federal officials this week declared a public health emergency — a procedural step, they said, to mobilize antiviral medicine and other resources and be ready if the U.S. situation gets worse.

U.S. Centers for Disease Control and Prevention officials say that so far swine flu cases in this country have been mild. But they also say more cases are likely to be reported, at least partly because doctors and health officials across the country are looking intensively for suspicious cases.

“As we continue to look for cases, we are going to see a broader spectrum of disease,” he predicted. “We’re going to see more severe disease in this country.”

Besser also repeated what health officials have said since the beginning — they don’t understand why the illnesses in Mexico have been more numerous and severe than in the United States. In fact, it’s not even certain that new infections are occurring. The numbers could be rising simply because everyone’s on the lookout.

He also said comparison to past pandemics are difficult.

“Every outbreak is unique,” Besser said.

The new virus is called a swine flu, though it contains genetic segments from humans and birds viruses as well as from pigs from North America, Europe and Asia. Health officials had seen combinations of bird, pig and human virus before — but never such an intercontinental mix, including more than one pig virus.

More disturbing, this virus seems to spread among people more easily than past swine flus that have sometimes jumped from pigs to people.

There’s a historical cause for people to worry.

Flu pandemics have been occurring with some regularity since at least the 1500s, but the frame of reference for health officials is the catastrophe of 1918-19. That one killed an estimated 20 to 50 million people worldwide.

Disease testing and tracking were far less sophisticated then, but the virus appeared in humans and pigs at about the same time and it was known as both Spanish flu and swine flu. Experts since then have said the deadly germ actually originated in birds.

But pigs may have made it worse. That pandemic began with a wave of mild illness that hit in the spring of 1918, followed by a far deadlier wave in the fall which was most lethal to young, healthy adults. Scientists have speculated that something happened to the virus after the first wave — one theory held that it infected pigs or other animals and mutated there — before revisiting humans in a deadlier form.

Pigs are considered particularly susceptible to both bird and human viruses and a likely place where the kind of genetic reassortment can take place that might lead to a new form of deadly, easily spread flu, scientists believe.

Such concern triggered public health alarm in 1976, when soldiers at Fort Dix, New Jersey, became sick with an unusual form of swine flu.

Federal officials vaccinated 40 million Americans. The pandemic never materialized, but thousands who got the shots filed injury claims, saying they suffered a paralyzing condition and other side effects from the vaccinations.

To this day, health officials don’t know why the 1976 virus petered out.

Flu shots have been offered in the United States since the 1940s, but new types of flu viruses have remained a threat. Global outbreaks occurred again in 1957 and 1968, though the main victims were the elderly and chronically ill.

In the last several years, experts have been focused on a form of bird flu that was first reported in Asia. It’s a highly deadly strain that has killed more than 250 people worldwide since 2003. Health officials around the world have taken steps to prepare for the possibility of that becoming a global outbreak, but to date that virus has not gained the ability to spread easily from person to person.