Is swine flu epidemic over? 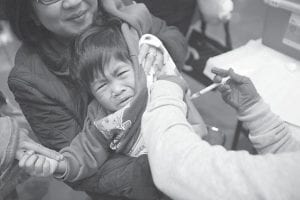 Ivan Bobila, 3, got a swine flu vaccine injection at the Bill Graham Civic Auditorium in San Francisco while the city was administering 16,000 swine flu vaccinations. An estimated 75 million Americans have been vaccinated against swine flu, through a government vaccination campaign that started in October. Federal health officials reported Feb. 5 that for the fourth week in a row, no states had widespread flu activity. (AP Photo)

If the U.S. swine flu epidemic isn’t over, it certainly looks as if it’s on its last legs.

While federal health officials are not ready to declare the threat has passed and the outbreak has run its course, they did report Feb. 5 that for the fourth week in a row, no states had widespread flu activity. U.S. cases have been declining since late October.

One U.S. expert said the epidemic has “one foot in the grave,” and there are many reasons to believe there won’t be another wave later in the year.

For one thing, the virus has shown no signs of mutating. The vaccine against it is effective. And roughly half the people in the U.S. probably have some immunity because they were infected with it or got vaccinated.

The World Health Organization is witnessing an international decline as well, and is discussing criteria for declaring the pandemic over. Britain this week shut down its swine flu hot line, which was set up to diagnose cases and give out Tamiflu.

“Clearly, the last four weeks have been one of the quietest January flu seasons I can remember in my career,” said Michael Osterholm, a prominent expert on global flu outbreaks with the University of Minnesota.

Since its emergence last April, swine flu has caused an estimated 15,200 deaths worldwide, mostly in the U.S. — a much lower number than initially feared. The positive outcome is primarily because the virus didn’t mutate into a deadlier form.

Even so, experts have praised the actions of the U.S. and Mexican governments and scientists who quickly developed an effective vaccine, even though there were months of delays in the production of the vaccine.

Whether it will stay quiet for the rest of the winter is hard to say, but some experts are beginning to lean that way.

“If it’s not dead, it’s weakening fast. It’s got one foot in the grave,” said Dr. William Schaff ner, a flu authority at Vanderbilt University.

A poll released Feb. 5 by the Harvard School of Public Health found that 44 percent of Americans believe the outbreak is over.

The Centers for Disease Control and Prevention released numbers Feb. 5 showing most states continued to have only occasional flu activity last week. However, only three states had absolutely no reports, and a CDC official cautioned that swine flu is still around and is likely to keep infecting people for weeks or months to come.

“We don’t seem to be seeing the disappearance of this virus,” said the official, Dr. Anne Schuchat.

Whether there will be another wave of swine flu — as was seen in the spring last year and again in the early fall — is a much harder question, she added.

An estimated 70 million Americans have been vaccinated against swine flu through a government campaign that started in October. Counting those who have already been infected and others who were vaccinated, perhaps 40 percent of the public has some immunity to the virus.

However, that means at least half of Americans don’t have immunity, and there are many places that have not been hit hard by swine flu yet, some experts noted.

Also, this is a global disease that can move quickly through air travel, and much of the rest of the world is not vaccinated, Osterholm pointed out.