Is this the year Cal doesn’t start a frosh?

If he wasn’t already preparing a new message for next season, John Calipari better get busy now.

It seems like every season at Kentucky he’s had to remind Kentucky fans that his “young” team needed time to blend tother and that having the “youngest team” in the nation always meant UK would reach its peak starting in February.

That theory won’t work this season with the “old” team that Calipari has put together because he easily has the most experienced team he’s had in his 13 years at Kentucky. If anything, Kentucky might go from annually having one of the nation’s youngest teams to having one of the oldest teams. 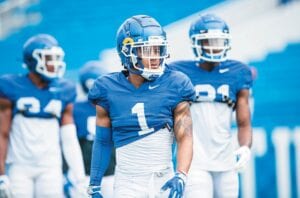 Receiver WanDale Robinson (1) figures to get the ball in a variety of ways this season at Kentucky. (UK Athletics Photo)

It would not be shocking to see Kentucky open the season without a true freshman in the lineup unless Jalen Duren, currently the No. 1 recruit in the 2022 class, does reclassify and sign with Kentucky as many think he could. If he does, Calipari would find a way to start him.

Duren cut his list of options to five last week. It includes Kentucky, Memphis and Miami along with two professional options — the G-League and the NBL.

But if Duren is not a Cat, it’s easy to see a scenario where Washington, Collins and Hopkins are all coming off the bench due to the talent and experience ahead of them.

There’s also the possible scenario of former Illinois center Kofi Cockburn, a seven-footer who averaged 17.7 points and 9.5 rebounds per game last year during his sophomore season, joining the Cats. He has declared for the NBA draft but last week also put his name in the transfer portal. Two of his coaches at Illinois — Orlando Antigua and Chin Coleman — are now on the Kentucky staff. 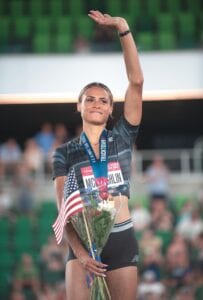 FOLLOW EX-UK STAR IN SUMMER OLYMPICS — Former UK track star Sydney McLaughlin set a world record in the 400-meter hurdles at the U.S. Trials but has the potential to go even faster in the Olympics. (USA Track & Field Photo)

When was the last time Kentucky didn’t have a freshman in the starting lineup? I could not remember a time John Calipari didn’t start at least one true freshman in his 12 seasons and Corey Price, the stats guru for UK athletics, confirmed that. He noted the last time UK didn’t start a freshman was Nov. 14, 2008, when the Cats lost 111-103 to VMI in Billy Gillispie’s final season.

Could that happen again this season depending on what Duren eventually does?

“Yes, on opening night it would not surprise me if there is not a freshman in the starting lineup but I have not seen any practices yet this summer,” said former UK All- American Mike Pratt, the analyst for the UK Radio Network.

“I could see a freshmen starting sometime during the season.There are always freshmen with talent that the ‘light’ goes on about what it takes to start and away they go.” s

When they were playing high school football against each other, quarterback Beau Allen and receiver/ returner WanDale Robinson often talked about playing college football together.

Robinson was a record-setting all-purpose threat at Western Hills in Frankfort who won the Paul Hornung Award as the state’s top player in 2018. Beau Allen was a prolific passer at Lexington Catholic who won the Hornung Award in 2019.

Robinson originally committed to UK before signing with Nebraska where he played in 2019 and 2020 before transferring to Kentucky during the offseason. Allen signed with Kentucky and redshirted during the 2020 season.

“He is going to help us out a lot. He’s great. He’s going to get the

Allen called Robinson “one of the greatest players” he has ever been around and noted how much fun it was to play against him and now play with him.

“He has definitely got better, too. I remember I threw him the ball one too many times in high school (when Robinson returned an Allen interception for a touchdown). Hopefully I can do that to him on purpose now and help us win games,” Allen said. s

When Kentucky hired Liam Coen as its new offensive coordinator, he said that one player he watched play when he was growing up was Kentucky quarterback Tim Couch, the No. 1 pick in the 1999 NFL draft.

“I thought that was great. I had no idea he grew up a Kentucky football fan or a fan of me and tried to wear his jersey like I did,” Couch said. “It’s really cool to see how (the offense) has grown and people have taken it in different directions. It’s just phenomenal.”

Couch joked that Mississippi State coach Mike Leach, his offensive coordinator at UK, probably runs the same system and calls the same plays as he did working for Hal Mumme at Kentucky.”

Couch had a record-setting career at Kentucky — 8,435 yards passing and 74 touchdowns — just like he did in high school at Leslie County — 872 completions for 12,104 yards and 133 touchdowns, all national records.

The former UK quarterback said it was not easy to choose whether he missed high school or college football more.

“In high school, it is pretty special because you are playing with guys you grew up with your whole life,” Couch said. “That is a pretty special thing to get to play every Friday night with your best buddies.

“In college you are meeting guys you have never seen. You come together and make a team. College is pretty special because of that That’s why it is hard to say which I miss most. The college game is so much fun.

Couch is again a finalist on the College Football Hall of Fame ballot and also understands how difficult it is to be selected for induction.

“Just to be a finalist is an honor,” Couch said. “Certainly I feel like I have the numbers to be in. I hope they put me in before I die because it’s the highest you can get.”

Dennis Johnson, a former all- SEC defensive end at Kentucky, does not understand why Couch is not already in the Hall of Fame.

“He is a no-brainer. There was nobody better,” Johnson said. “He was able to distribute the ball. He brought excitement not only to Kentucky but around the country. He played in the best conference was able to elevate the Air Raid to national prominence.”

Anthony White was part of that prolific offense Couch directed. Like Johnson, he sees no reason for Couch not to be a Hall of Famer.

“I don’t know what more he could do to be in the Hall of Fame,” White said. s

Sydney McLaughlin was a SEC and NCAA champion in the 400-meter hurdles during her one season at Kentucky — which came after she made the U.S. Olympic team at age 16 for the Rio Olympics.

She’s headed back to the 2021 Olympics in Tokyo after setting a new world record of 51.9 seconds in the U.S. Olympic Trials in the 400 hurdles. She became the first woman to break 52 seconds.

One reason McLaughlin credited for her success was a switch to coach Bob Kersee. He has coached some of America’s best female Olympians including his wife, Jackie Joyner-Kersee, along with Florence Griffith Joyner, Gail Devers and Allyson Felix.

“If anybody knows Bobby, he is old school,” said Sharrieffa Barksdale, a 1984 Olympian who now works for USA Track & Field. “He can predict where you should be at all the time. Being out there with him daily, he’s such a nononsense person.”

Kersee has McLaughlin study tape of Edwin Moses, one of the all-time great hurdlers, and get tips from Joyner-Kersee. He also helped McLaughlin change from the standard 15 strides between hurdlers women take to 14 by extending her stride.

“Sydney never stutter stepped (in the Olympic Trials). He gave her a chance to do the 100 hurdles with that bad leg and now she can hurdle with either leg without stuttering. I could alternate but would stutter step. She has mastered what he wanted her to do and it showed,” Barksdale said.

Barksdale, who lived in Lexington for 22 years, said getting to train with Allyson Felix, another Kersee client, helped McLaughlin also. Felix, 35, qualified for a fifth Olympics during the U.S. Trials.

“Just being around Allyson was good for Sydney,” Barksdale said. “It was always easy to tell Sydney was going to be special even before she got to UK. But now she has just gone to a different level.”

Barksdale thinks the world record could be lowered again at the Olympics by either McLaughlin or reigning world champion Dalilah Muhammad, who finished second in the U.S. Trials in 52.42 seconds.

“ Between them, the world record will go down again,” Barksdale said. “She (McLaughlin) has so much left. She did not even look like she was running. She wanted it and sacrificed and gave up a lot to get to this point. Both of them (McLaughlin and Muhammad) are going to be peaking at the perfect time for the Olympics.

“They push each other. They both went up to each other after the race, and that was really special. That’s what our sport is all about and why they are good for each other.”

So what time could the 400 hurdles produce in Tokyo?

“I think 51.6 or 51.7. Either one of them could do it,” Barksdale said. “The one who runs the perfect race will win gold and set another world record. I know it’s coming.” s

DeMarcus Cousins may have rejuvenated his NBA career with the Los Angeles Clippers after battling injuries for about four years. He certainly put his name back in the national spotlight during Game Five of the Western Conference Finals when he had 15 points in 11 minutes in a win over the Suns even though the Clippers were still eliminated in Game 6.

Cousins said he has felt more “accepted” with the Clippers than some other teams he has been on in the NBA. He played in 41 games and averaged 8.9 points, 6.4 rebounds and 1.7 assists per game while shooting 42.6 percent from the field.

“I’m not going to change. My mindset don’t change. When I step on the floor, I feel like I’m the best one on the floor regardless of who is in front of me,” Cousins said. “And I know for a fact can’t nobody guard me one-on-one. So my mindset doesn’t change. I just wait for my opportunity.”

That’s the same type swag/confidence he had at Kentucky when he helped the Cats win the national championship in his one season with UK. However, he knows nothing will be easy based on what has already happened in his life.

“My life’s been full of adversity. I’ve been going through s—. I don’t expect it to stop,” Cousins said. “I’m grateful for the moment I’m in. When my name is called, I’ll just take advantage of that moment. That’s all I can do.” s

Quote of the Week: “The biggest thing about coming here was the player development and getting players to the league. Kevin Durant is my favorite player. I try to mimic off that and get my game better. I want to get my (3-point) shooting more consistent. That is what the NBA is coming around to,” UK freshman Daimion Collins on coming to Kentucky.

Quote of the Week 2: “I have always thought Cal (John Calipari) and coach (Rick) Pitino would make great politicians. They never answer a question. They can both redirect any question you ask and spin it the direction they want,” ESPN reporter/analyst Katie George on interviewing the two coaches.

Quote of the Week 3: “I have always said I am here. I am going to make the most of the choice I made. I am happy here,” UK junior Emma King on why she had no interest in putting her name in the transfer portal.