Is UK in danger of missing NCAA’s? 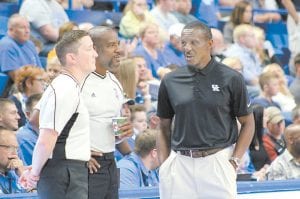 Dwane Casey learned to check his ego during his playing career at UK. (Vicky Graff Photo)

Could Kentucky be in danger of missing the NCAA Tournament, something that no one even thought was a possibility when the season started?

Kentucky’s home loss to Florida dropped the Wildcats to 14-5 overall and 4-3 in SEC play. The Cats play at West Virginia Saturday and still have SEC road games at Auburn, Arkansas, Missouri, Texas A&M and Florida. It’s possible UK could be the underdog in every game.

Plus, remember that UK barely beat Texas A&M and Georgia in Rupp Arena.

The Cats do not have a win over a team currently ranked in the top 25, a rarity in the John Calipari era. Kentucky’s best two wins would be over Louisville and Virginia Tech.

Calipari said after the Florida loss that he was more encouraged about his team than he had been all season because of the way it played defense and he finally was close to having a healthy roster with both Jarred Vanderbilt and Quade Green playing. However, outside shooting, turnovers, rebounding and lack of toughness continue to be problems for this team.

The 2013-14 team struggled during the season, was an eight seed in the NCAA and then made the national title game. Could that happen again? Maybe, but remember there is no likely goto scorer on this team like that team had with Julius Randle. And whether you liked him or not, there is no Andrew Harrison playing point guard for this team. His defense and toughness — and ability to pass the ball to others — would be welcome on this team.

Many Kentucky football fans were disappointed that the Wildcats finished 7-5 last season and lost their last three games, including the Music City Bowl game to Northwestern.

Former Kentucky quarterback Freddie Maggard, now an analyst for the Kentucky Radio Network as well as Kentucky Sports Radio, has a different opinion.

“I said Kentucky overachieved by going 7-5, and I am sticking by that,” said Maggard.

He believes running back Boom Williams leaving for the NFL, receiver Jeff Badet transferring to Oklahoma, offensive lineman Ramsey Meyers opting to give up his final year of eligibility, receiver Dorian Baker and offensive lineman Cole Mosier going down with preseason injuries and defensive lineman Alvonte Bell being put off the team took a bigger toll on UK in the 2017 season than most understood.

“All that created a big hole,” Maggard said.

Kentucky doesn’t figure to have nearly as many big holes to fill going into next season. Key players that debated leaving for the NFL all came back to UK. No one has given up a final year of eligibility. The December signing class has players that can help next season.

“To go into Michigan and get McCall was incredible,” Maggard said. “He was rated the No. 1 (offensive) guard in the Midwest. I like that he is a technician already. He has the frame and skill that he could play guard now but he wants to play defense, and I like that. He can run and he is a plug and play nose tackle. He could play behind Quinton Bohanna and there would not be a significant drop off. We saw how much better Kentucky was when it had a healthy Quinton Bohanna, and McCall is the same kind of kid.

“DeAndre Square is out of Cass Tech. It’s a school a lot like Oak Hill Academy putting out (basketball) players for top colleges every year. He had a LSU offer. He was the top defensive player in the state of Michigan.

“That’s why to me, getting those two kids out of Michigan was the storyline for this signing class.”

The next biggest storyline in Maggard’s opinion that was mainly overlooked by most was signing offensive linemen Darian Kinnard of Cleveland, Kenneth Horsey of Florida and Quinton Wilson of Cincinnati.

“Kinnard was an all-American, Horsey can really play and Wilson is my sleeper pick for the class. He’s a top five center in the country and 4.0 (grade-point average) student. He played tackle in high school. All three of these guys are elite in the classroom,” Maggard said.

Wilson reminds Maggard of a “better version” of Kentucky senior Bunchy Stallings coming out of high school. Stallings was not a high profile signee in 2014 but Maggard predicted then he would be a big-time player — and he has been.

“You could argue two years ago that UK had a better offensive line than Georgia and Alabama,” Maggard said. “This year not so much. But these are the kind of signees you want in your offensive line to win in the SEC.”

Kentucky fans remember when the point guard was thought to be a lock — or at least a strong, strong lean — to Kentucky. However, he ultimately decided he wanted an offense where he could get more shots and freedom than he would have at Kentucky.

Young shoots a lot but has led the nation in scoring at around 30 points per game — and became the first Big 12 player to score 25 or more points in 13 straight games — most of the year while averaging about 10 assists per game. But he’s also been turnover prone. He had 12 miscues in a loss to Kansas State and 47 in a six-game stretch. He had 48 points and eight assists last Saturday against Oklahoma State but also had seven turnovers in the loss.

“I knew how good he was, but I didn’t even realize he was this good. The biggest thing in this, and it’s a great lesson, (Oklahoma coach) Lon Kruger, who I have unbelievable respect for, basically said, ‘We’re going to play through you. It’s all going through you. You’re going to shoot when you want.’ And he did not lie. He did not lie,” Kentucky coach John Calipari said.

No he did not. Calipari would never tolerate a 12-turnover game. He couldn’t have one player taking that many shots — just ask John Wall, Anthony Davis, Malik Monk and others — because the Cats have other talented players. He wouldn’t promise Young the green light that Kruger did, so Young made the best choice for him and stayed in state to play for the Sooners.

“Hopefully if he had come here I would have realized early, this kid needs a little more room than some other guys that I’ve had,” Calipari said. “Hopefully I would have realized that. But I knew he was good, which is why we recruited him so long, but I didn’t realize he would be able to do what he is doing, which is basically 80 percent of their baskets, 70 percent of their baskets, he either scores or assists. That’s a ridiculous number.

“And he’s got teammates that are letting him play and it’s helping them and they’re winning. And he’s got a coach who, again, one of the best in our business. Said, ‘Here’s what we’re gonna do,’ and he went out and did it for the kid. So I’m happy for Trae. I hope we don’t have to play him, but happy for him.”

Ever wonder if the coach of a professional team had no choice but to play an athlete because he had a high dollar contract? So did I so I recently asked Toronto Raptors coach Dwane Casey, a former UK player.

“You have to consider salaries. I am entrusted with what is best for the organization and I have to look at the big picture,” Casey said. “You never want to sit a big salary player. There better be a good reason or you are devaluating a team asset and you never want to do that. Players want to be coached. I don’t care if he’s making $2 million or $15 million per year. They want to be given information to make them successful.

“Players do not want to be embarrassed and not prepared. But a difference is that this is a players’ league. In college, the coach is king of the mountain. We (NBA coaches) all have to check our egos at the door when it comes to coaching.”

Casey said he got a lesson about how to check his ego from being a role player at UK.

“That kind of humbles you. You come out of high school as the man and then you are just one of many stars,” Casey said. “You learn the value of team chemistry, you learn about being a great role player, you learn the team and program are bigger than you. I learned all those things at Kentucky that help me now.”

Two top six finishes like Kentucky dance had at the national championship would be noteworthy at most schools. However, Kentucky dance cannot help but be in the shadow of UK’s dominant cheer squad, which is recognized as the nation’s best annually.

“It does make it tough. We are so used to it,” sophomore Sydney Prince, a dance team member from Lexington, said. “People will come up to us and say, ‘UK cheer,’ and we have to tell them we are UK dance. But we know they are amazing. It’s easy not to get down about that.”

She says dance members joke that they eventually hope to be able to hold up one finger for winning one title where the UK cheerleaders can put up “23” for their titles after another recent win in Orlando.

“We were right in the front for their final performance. It was flawless,” Prince said about the cheerleaders. “The energy in the room was crazy. Everyone wants to see them. People are packed in like sardines.

“ They have so much pressure on them because of the high expectations. For us, we have a bumpy road to get to the top because in the dance world Minnesota is the top. For UK cheer, they have to win or it is a big upset that they did not. For us, since we have never won, we are pleased just to place. But UK cheer has so much pressure.”

However, Prince said watching UK cheer there was no doubt who had the best team. She said other cheer teams this year had copied UK’s “tricks” from last year to try and match the level of difficulty.

Quote of the Week: “I don’t care what they faced at Tennessee, LSU and South Carolina, it’s going to be a lot tougher. This is UK’s first game there since 1970. This is Hatfields versus McCoys. There’s been bad blood between these fan bases for years,” former Cats’ Pause publisher Oscar Combs on UK’s game at West Virginia Saturday that will be part of ESPN College GameDay.

Quote of the Week 2: “No, I don’t see confusion. I see somebody trying to get their own, and now it leads to a turnover or a missed play. When we move that ball, and we drive and find people, we’re really good,” John Calipari on whether his team gets confused during the scoring droughts it seems to have every game.

Quote of the Week 3: “Boom (Williams) made his decision. You can’t knock him for what he decided. We got two different mindsets. It was his decision. Mine was different,” UK safety Mike Edwards on his decision to stay at UK for his senior year compared to a year earlier when running back Boom Williams elected to leave for the NFL and went undrafted.