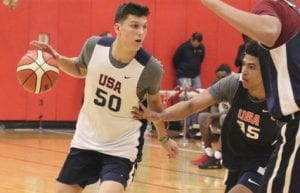 The 6-5 guard from Whitnall High School in Greenfield, Wisconsin has a fan in Rivals.com recruiting writer Krysten Peek.

“He is the best shooter in the (2018 recruiting) class from be- yond the arc (3-point line),” said Peek. “He could be the best pure scorer in the class.

“I saw him in one workout where he did not miss a single shot. He can shoot a 3 like a lay-up. He is just a pure shooter and there are not many of them out there.”

He averaged 32.9 points, 8.2 rebounds, 3.9 assists and 3.1 steals per game while shooting more than 40 percent from 3-point range. He was the top-ranked player in Wisconsin and participated in the USA Junior National Team minicamp. He also played in the Jordan Brand Classic Sunday and will participate in the Nike Hoop Summit.

“I love his jump shot, love his midrange game,” ESPN recruiting director Paul Biancardi said. “For my money, that’s where he stands out — inside the arc but outside the paint. He has a nice pull up game off the dribble. He has a good 3-point shot but he has a better midrange game.” 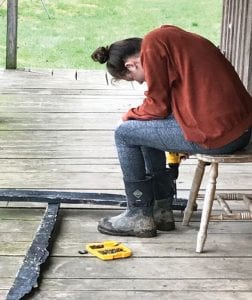 Kentucky commit Emma King of Lincoln County spends a lot of time in the gym, but she also works on her family’s farm and recently had to repair a gate she accidentally damaged. (Eric King Photo)

Peek also said Herro is more athletic than many believe.

“Any of these top 50 players have to be athletic,” Peek said. “They are playing against great competition and sometimes maybe he didn’t look as athletic if he was guarding (Duke signee) Tre Jones at a USA Basketball workout. But that’s not fair. I think his athleticism is fine and will be fine at Kentucky.”

Herro’s high school coach, Travis Riesop, says getting invited to play in the Jordan Brand Classic and Nike Hoop Summit verify that Herro is more than just a shooter.

“He has done a lot of nice things in his AAU and high school careers to give him the opportunities he has now,” Riesop said. “I don’t think it was selfish for him to want that. You want people to know what you are doing is worthwhile and playing in events like these is special for any player.

“Sometimes we don’t have anybody from our state getting to play in events like these, so that is something pretty cool and something that shows just how good he is.”

Guess what? So did his father, Paul Washington Sr.

“I am a fan and wanted him to make the free throws, too,” Paul Washington said.

However, Paul Washington, a former college player and current coach at Findlay Prep in Nevada, understood some of the reasons his son — who had 18 points and 15 rebounds and played all but about 40 seconds in the game — might have missed some shots.

“He played inside where bodies are always weighing on you. It takes a lot of energy out of you,” Paul Washington said. “When he started missing free throws at the front of the rim, I knew he had no legs. He was tired.

“He went after rebounds that were not in his area. He fouled out two or three kids. His will to win definitely showed during that game.”

He was also playing with a broken finger, an injury he might have suffered as far back at late November.

Paul Washington said his son’s best play might have been on Kansas State’s game-winning shot. P.J. Washington came from the opposite side of the court and tried to block a shot at the rim.

P.J. Washington has declared for the NBA draft but will not hire an agent so he can return to UK for his sophomore season if he does not get the evaluation he wants to stay in the draft.

“We will offer him advice on the pros and cons of what to do, but in the end it is his choice just like picking a college was his choice,” Paul Washington said.

LSU signee Nazreon Reid admits he paid a lot of attention to Kentucky basketball growing up in New Jersey.

“The name has been around for year and years. I had no choice but to hear about it (Kentucky basketball) regardless of whether I wanted to or not. They were on TV all the time,” Reid said.

The 6-11, 240-pound Reid made a splash on ESPN himself during the McDonald’s All-American Game in Atlanta when he had 15 points, 11 rebounds, two assists and one block in 20 minutes

When he thinks of UK basketball, he says three things come to mind: “Winning, NBA, just lot of hard work and dedication. Nothing but good things,” he said.

Reid is a John Calipari fan, too. He calls him “honest, dedicated” to his team.

“I like the way he pushes players. I like that to some extent. I didn’t go there but I don’t have a problem with his coaching style,” Reid said. “I can’t wait to play against Kentucky. We will go at it. This past year they beat LSU by three and hopefully this year we can beat them because any time you beat Kentucky it’s going to be a big deal.”

Kentucky baseball coach Nick Mingione has made UK baseball exciting for fans and players. He never seems to have a down day or bad moment.

“He is just full of energy and loves coming to the yard every day hanging out with us,” senior catcher/first baseman Troy Squires said. “He loves each and every one of us like his own and treats us all like that, including his coaching staff. That goes a long way. It’s a family atmosphere and you enjoy playing hard for him.”

Does he ever have a down day?

“I don’t think so. I can’t think back to one,” Squires said. “There are no bad days with him and that’s one thing he tries to preach to us. There’s never going to be a day that’s worse than somebody else’s. Just come in thankful you are playing baseball at the University of Kentucky and in the SEC. You are not going to have a bad day.”

Mingione prides himself on inspirational sayings that he shares with players and others.

“It’s not the same every day. He has something different every day. We have a quote he sends out to us every day before practice and it is always different. It motivates us for sure,” Squires said.

King verbally committed to Kentucky before the start of her junior season and it’s unusual for her to go a day without being in the gym working on her skills.

However, her father — Dr. Eric King — also likes to put her to work on his farm doing a variety of jobs. Recently she accidentally tore out a section of fence while helping him.

“She tore out the fence by driving my Ranger too close to the opening because she didn’t want to open the gate as wide as it needed to be,” Dr. King said. “The seat belt caught on the boards. Then she spent about an hour fixing it. Lesson learned hopefully.”

She won’t have to repair fences at UK, but she will have to correct mistakes and the lesson she learned on a recent spring day on the farm might have been good preparation for what lies ahead at UK.

“Coach (Joe) Hall named me team captain my senior year. That compliment meant a lot to me and still does,” Casey said. “To me trust is more important than being loved. It was the ultimate compliment coach Hall gave me.”

“He told me, ‘Dwane, any time you are invited to speak, do it,’” Casey said. “That was the greatest advice ever. I take pride that I have been in almost every county in Kentucky whether it was speaking, recruiting (as a coach at Western Kentucky or Kentucky) or working for Oscar Combs selling Cats’ Pause advertising.

“I have done a little bit of everything in my life and loved every minute of it. There is not one thing I have regretted about playing and coaching at Kentucky, coaching at Western Kentucky. You make far greater memories there than in the NBA. Of course, winning a championship at Dallas was not too shabby.”

“We call him Big Cat and he works with our big guys,” Casey said. “He was such a physical player. He played for Miami and Pat Riley. He played here in Toronto for me for two years until his body said no more. But he does a heck of a job with our big guys now.”

There’s also one other plus for having Magloire on the staff.

“If anybody wanted to beat me up, he would stop them in a hurry,” Casey joked. “So just that makes him great to have around.”

Quote of the Week: “We have been at a lot of camps together, hung out together. They are pretty good guys — real cool off the court to hang out with. They are good teammates on the court and pretty good players. Keldon is a trash talker but that is what everybody does. It’s part of basketball. He’s no worse than me,” Mississippi State signee Reggie Perry on UK signees Immanuel Quickley and Keldon Johnson.

Quote of the Week 2: “People do not understand how hard it will be to replace Austin and Stephen. That leadership and toughness that Stephen had was unreal. He was beat up and came back for more. We did not know how beat up he was.

He was held together by duct tape and dental floss last year. Austin is leaving big shoes to fill. You always believed he would make the kick,” UK Radio Network football analyst Freddie Maggard on quarterback Stephen Johnson and place kicker Austin MacGinnis.

Quote of the Week 3: “I’m willing to step up and take on any leadership role they throw at me. It’s kind of like saying it’s my time. My time is here, and I’m not going to let it slip through my fingers,” junior linebacker Kash Daniel on the 2018 season.