Is video game competition made for TV?

By GARY GENTILE The Associated Press 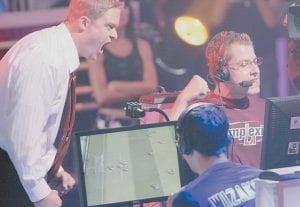 Four race cars barrel down a virtual track, jostling for position. Announcers shout their commentary over growling engines until a winner speeds past a checkered flag.

The frenetic race televised on DirecTV wasn’t a NASCAR event. It was staged as part of a new video game league that aims to turn gaming into a full-fledged sport, as compelling to watch as the National Basketball Association or Major League Baseball.

The Championship Gaming Series debuted last week in the U.S. and has franchises around the world that pay top players base salaries of $30,000 plus bonuses.

Organizers hope to attract an audience of the same young gamers who pushed computer and video game software sales to $7.4 billion in 2006 – a 6 percent increase from 2005, according to the Entertainment Software Association.

Advertisers are eager to reach those 18 to 24 year-old consumers.

The challenge for the league is making the on-screen action compelling enough to persuade those gamers to stop playing and start watching.

“Are those guys willing to put down their controllers and pick up their remote control to watch their television?” asked Steve Lipscomb, founder and CEO of World Poker Tour Enterprises.

Lipscomb helped turn poker into a TV hit by placing cameras under tables to give viewers a look at the cards held by each player.

He said he turned down chances to start a video game league, fearing the challenges might be too great to overcome.

“If they can find a way to translate the experience of gaming into a great spectator sport, there is an opportunity there,” Lipscomb said.

DirecTV is spending relatively little on the new league. It is one of several homegrown channels the company hopes will catch on.

“Today, it doesn’t move the needle,” said Steve Mather, an analyst at SMH Capital. “But strategically, it is in this basket of items that could develop into something. They’re in the game, at least.”

The two-hour video game matches, which began July 9, are staged twice a week on a movie sound stage in Manhattan Beach.

A studio audience of about 200 people cheers on cue while players face off in front of video screens. Team managers crouch nearby to offer encouragement.

Most games played in the league, such as “Dead or Alive 4” or the soccer game “FIFA 07,” are one-on-one matches. Others, like “Counter-Strike Source” involve five-person teams squaring off in multiple rounds.

The key feature of the broadcasts are the multiple “in game” cameras that follow the action, making viewers feel like they are on the soccer field or peeking over the shoulder of a gun-toting mercenary. Flashy graphics help tell the story of what is happening on the screen.

“It’s got the elements of strategy, skill and the camaraderie of team sports that people love,” said Dave “Moto” Geffon, general manager of New York 3D, one of six U.S. teams in the league.

Teams have also been created in Asia, Europe and South America. Regional winners will compete in a world championship later this year.

Competitive video gaming isn’t new. The Cyberathlete Professional League was formed in 1997 and hosts tournaments around the world that aren’t televised. Organized matches are also popular in Europe and Asia.

In addition, the two-year-old World Series of Video Games has deal to air some of its matches on CBS.

The Championship Gaming Series hopes to differentiate itself by offering regular broadcasts of team competitions with high-tech showmanship.

“The trick is to make something entertaining both to the hardcore gamer and also to a mainstream audience that is either a casual gamer or not a gamer at all,” he said.