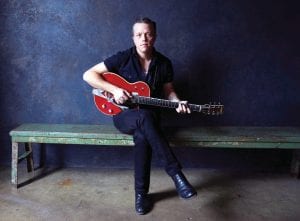 Jason Isbell was motivated on his breakthrough 2013 album “Southeastern” to tell his story about quitting drinking and turning his life around. He was driven on the 2015 follow-up, “Something More Than Free,” to prove newfound success wasn’t a fluke.

What’s next? Now established as a leader in the Americana genre, Isbell’s purpose is deceptively difficult — maintain a high standard of songwriting with the newness of discovery gone. He’s taken a step in that direction with the release of “The Nashville Sound,” co-credited with his backup band, the 400 Unit.

His new songs speak to and about people in middle America dealing with a changing culture and economy, growing up and mature love. “If We Were Vampires” is a love song about life’s impermanence. “White Man’s World” confronts subtle racism. Isbell and his wife, fellow musician Amanda Shires, are parents of a two-year-old girl and that naturally changed his outlook.

Isbell, 38, recently talked about his new work with The Associated Press.

AP: Is there a song on the album that you might not have written before becoming a parent?

Isbell: “White Man’s World.” I was home the day after the election, and I kept thinking how lucky I was that I didn’t have to explain it to her, because she was only a year old at that point in time. I’ll let history explain that to her as she gets older. There was a feeling of alienness, of not belonging, that a lot of us had on that day, a feeling that I thought I knew people better than I did. I felt like an outsider again. I felt like I was transported back to the lunchroom in school, where I was a little bit — shall we say — too creative to fit in with most of the people I went to school with. I was really fearful that she would see the world in that way, as a place where she wouldn’t fit in. What I was focused on was ‘how do I make this a better place for my daughter.’ Because a majority of my audience is white males, I want them to be aware of the fact that not everybody in the world is.

AP: Is there a general takeaway you want fans to get from this album?

Isbell: Compassion. In my experience, I got to a certain point where most of my problems got solved. I quit drinking, I cleaned myself up, started living my life right, made good decisions, started a family and everybody is healthy and happy. I can’t really sing the blues anymore. So I had to look outside myself and empathize with other people. As a songwriter, that’s a big stage in development, because a lot of people miss it. A lot of people fall flat when they try to do that and you get decades where people write these out of touch songs.

AP: You can dip into things, like on (the song) “Anxiety.”

Isbell: I can, but I can’t write entire records about it, like “Southeastern.” Let’s hope not, because on that one I was pulling out my own bones. I think feeling compassionate is the one thing I hope people can take away from this. Before I was hoping people would have compassion for me. Now I hope it’s for other people they see who need it.

AP: It seems you really wanted to speak to white men between the coasts, the ones who played such an important role in the last election. Is that what you tried to do?

Isbell: Where I grew up, it’s very rural, working class Alabama. I don’t even know if it would be working class anymore — there isn’t that much work to do. I try to represent those folks, sometimes just by telling my own version of the story. With a song like “Last of My Kind,” it deals with what it like for me to adjust to the developed world after I had come out of a part of the country that was so isolated.

AP: How is fatherhood treating you?

Isbell: We’re really lucky. She’s so easy, compared to what I hear. When she was born, I expected there would always be someone in the house perpetually screaming.