Isom man charged with making meth in his home 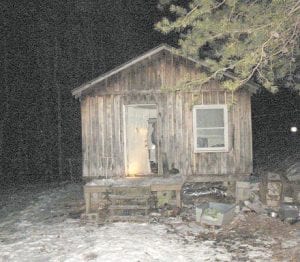 Police say they arrested 52-year-old Gary Smith after they found he was making methamphetamine in this shack near Isom.

A 52-year-old Isom man was arrested Tuesday night after police found a meth lab in his home.

“In Letcher County so far we hadn’t really had a problem with meth but it is starting to creep in and we are making every effort to stop it before it gets worse,” said Letcher County Sheriff Danny Webb.

After a week-long investigation by the sheriff’s department into complaints of meth distribution in the county, police linked Smith to the meth lab.

“When we arrived at the residence, Mr. Smith attempted to run into a wooded area behind his residence when he stopped when offic- ers caught up to him and told him they were going to Tase him,” said Lt. Brian Damron of the Letcher County Sheriff ’s Department. “He was taken into custody and showed officers where all of the meth precursors were and how it all worked. He stated that in all it took approximately two hours to make.” 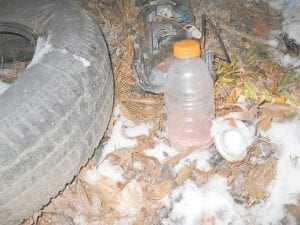 “In the Gatorade bottle is the finished product and what would have been ready for street sale and or use when the liquid on top of the crystallized meth was taken out,” said Letcher County Sheriff’s Lt. Brian Damron.

Damron said a precursor is an ingredient used to make meth. Damron said Sudafed, propane, drain cleaner, lithium batteries and small plastic hoses used to drain the byproduct were used in this operation.

“Everything you make it with you can buy at Walmart,” said Webb.

Damron said there are several ways to make meth and the lab found Jan. 12 is referred to as a “one pot method.”

“In the Gatorade bottle is the finished product and what would have been ready for street sale and or use when the liquid on top of the crystallized meth was taken out,” said Damron.

Damron said a meth cleanup team from Kentucky State Post 13 in Hazard was called in to remove the byproduct. The team will determine how many precursors were used in the operation.

Webb said Smith’s residence is located about 100 yards from the John B. Adams Store.

Damron has charge of the investigation.