Isom store has been serving county residents for 72 years

The John B. Adams Store at Isom is seen in this photograph taken earlier this week. The store, located off KY 15 near the mouth of Little Colley Creek, has expanded greatly during its 72 years of doing business.

Electric lights were far from universal in Letcher County in the 1940s, but there was always one light burning in the pre-dawn darkness near the mouth of Little Colley.

At 4 a.m. it was time for John B. Adams to open his store for miners on their way to work in the truck mines. He’d keep it open until 10 o’clock at night.

“A lot of people didn’t have electricity back then, and they couldn’t get a lunch ready to take with them to the mines, so Daddy would open the store for them to get lunchmeat and things to take to work with them,” Danna Richardson said.

Seventy-two years later, Richard- son is running the store her father founded with help from her sister Donna and a handful of employees. It opens and closes at more conventional times now, but it’s been a fixture in Isom for as long as nearly anyone can remember, selling everything from lunchmeat to work boots, and cowboy boots to dresses.

John B. Adams was from Pine Top in Knott County. He taught school there for 12 years, ran a small store, and pack-peddled for a while in the 1930s, and then went to work for a coal company near Vicco. 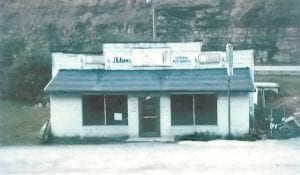 The John B. Adams is seen in this photograph taken in the late 1960s.

“He ran the company store, and he hated it,” Richardson said. So he started looking around the area for something else, and found a small, white store building at Isom with an apartment in back. He took his wife, Broza, to see it, and they made the move from Perry County to Letcher County.

Richardson said one of the first things he did was pour a concrete porch on the front that was later boxed in. He added on again later, and built outbuildings to sell animal feed, linoleum flooring, nails, paint and other items that wouldn’t fit in the tiny store. The girls helped from the time they were young. Richardson said she could read when she was 5 years old, and she and her sister used their skills to help customers who couldn’t read.

“People would come with a list, and we’d take it through the store and get their groceries,” Richardson said. 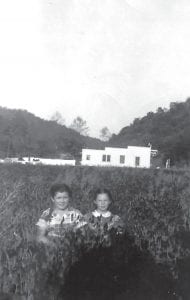 The daughters of John B. Adams, Donna Adams Rowe (left) and Danna Adams Richardson, were photographed in a field beside the John B. Adams Store in Isom in the 1950s.

And if someone didn’t have a car, that wasn’t a problem.

“People would walk and come, and Daddy would take them home with their groceries,” Richardson said.

The store put Richardson through college in Pikeville with $200 a semester and all the food and snacks she could take with her.

A minister in Pikeville would bring her to Jenkins on weekends she needed to come home, and her father would drive there to pick her up. On Sundays, he’d take her back to Pikeville, then more than a two-hour drive one way.

By 1988, business had grown to the point that Danna needed to expand, so she borrowed money, built a new store on the property and had the old one torn down. Business continued to grow and she added on again, doubling the size of the new store.

She retired from teaching in 1993 and started running the store full time. She said she’ll never retire from that.

With the economy in Letcher County continuing to struggle, revenue for stores is down, too, but Richardson said she can still pay the bills and keep her employees working.

What’s her advice for people who want to succeed? You have to work at it.

While that might sound scary when one considers her family history of 19-hour workdays, Richardson said if that’s what it takes, that’s what you have to do.

“ You had a roof over your head, food on the table, and clothes on your back,” she said of her childhood. “If you didn’t do that, you didn’t have it.”