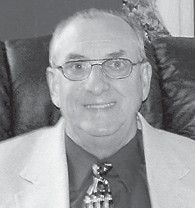 KENDALL ISON of Whitesburg was recently named vice chairman of the Board of Directors of the Eastern Kentucky Concentrated Employment Program Inc.

Kendall Ison of Whitesburg has been named vicechairman of the Board of Directors of the Eastern Kentucky Concentrated Employment Program, Inc. (EKCEP).

Ison taught at Cowan Elementary School, worked at the Department of Human Resources in Letcher County supervising all public assistance programs, worked for 30 years for the United Mine Workers of America Health & Retirement Funds.