It rained on their parade

Many of the business, school, and civic organizations which had planned to participate in the 2009 Mountain Heritage Festival Parade didn’t let Saturday’s heavy rains keep them at home. While the crowd of onlookers in Whitesburg was smaller than usual, they were appreciative of what they saw and the effort it took to make sure the show went on. 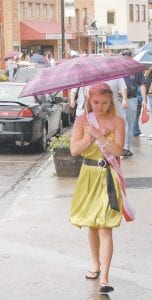 Miss Teen Mountain Heritage Courtney Fields tried to keep herself sheltered from the rain as she walked up Main Street after riding on the top of a car during the parade. 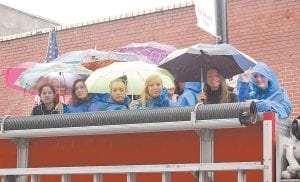 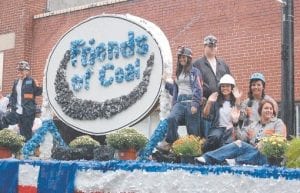 Cosmetology students at the Jenny Lea Academy in West Whitesburg used a “Friends of Coal” theme for a float they built for the parade. 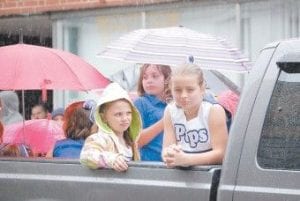 These members of the Cowan Elementary School “Pups” cheerleading squad didn’t appear to be enjoying the rain. 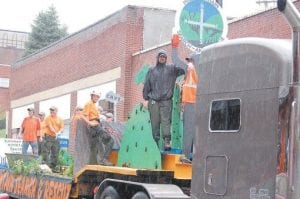 Members of the newly-formed Pine Mountain Search and Rescue team designed a float showing ways their services are needed in Letcher County. 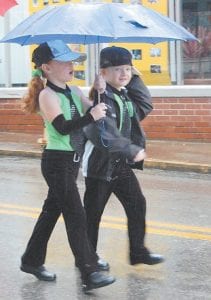 Makenna Johnson and Bailey Kincer walked through the rainy parade after performing a routine as part of the Silver Spinners baton twirling team. 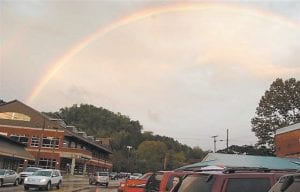 Diana Holbrook of Webb Branch, near Jenkins, had her camera handy when this rainbow appeared in East Whitesburg about 6:30 p.m. on Saturday. Finally, the long day of rain had stopped just in time for a concert featuring Nashville-based country-rock duo Halfway to Hazard.