“Rain” is a Broadway show billed as a “Tribute to the Beatles.” Listening to four mop-wigged guys play those unforgettable songs from the ‘60s, however, it becomes pretty clear that this is actually a tribute to something else: middle age, that magical mystery stage of life when part of you feels “just 17,” even as another part hears “Imagine,” and starts imagining how good it will feel to take your shoes off once you get home.

You know what I mean?

The production makes no bones about what it is and who it is appealing to: It is a trip down memory lane, designed for those who owned, at some point, either a Nehru jacket, love beads or “Sgt. Pepper’s Lonely Hearts Club Band.” On vinyl, that is. Not an iPod. At least, not the first time around.

When the camera panned the audience, it was a sea of dyed hair and flatteringly loose-fitting shirts. The screaming teens of the ‘60s had been replaced by smiling school administrators, accountants, proctologists — the people we just didn’t think about as kids. And when we theatergoers were asked to wave our hands in the air to the chorus of “Hey Jude,” most of us — well, one of us, anyway — suddenly realized just how LONG that chorus is. Like, too long to keep waving your hands at anything higher than half-mast after a while. (Note to self: rejoin gym!) 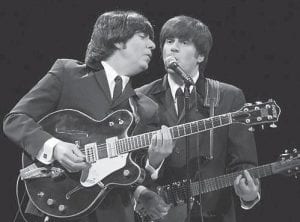 Joe Bithorn and Steve Landes impersonate two of The Beatles in the Broadway production ‘Rain.’

The songs themselves, of course, were shots of pure glee, a good reminder that putting on a Beatles album is always a great idea. (Note to kids: An album is a collection of songs.) “I Want To Hold Your Hand,” “We Can Work it Out,” “Get Back” — they still send a jolt of joy straight to the soul. And the more somber songs — “Blackbird” or “Let It Be” — they somehow make me feel deeper and more in touch with the infinite than most of my worship time.

But when you’re seeing them performed by folks pretending to be the Beatles, right down to four not-so-fab English accents, it makes for a certain, inevitable wistfulness, too. The real Beatles are gone — two of them forever. And even if somehow they could get back to where they once belonged, they’d be, well, old. It sounds wrong to even write it. They were youth embodied — rebellion and hope in heart-piercing harmony. They wondered if anyone would still need and feed them at the astonishing age of 64.

And so, as we all stood up to dance, and sat down again rather gratefully, and remembered where we were when we first heard “It was 20 years ago today, Sgt. Pepper taught the band to play” (for me, in the always-cold family room of our suburban Chicago home, my sister presiding over the record player), nostalgia, happiness, trivia and perspective sloshed together. “Oh, what a crush I had on what’s-hisname in social studies!” “That fake George Harrison looks like he could run a diner.” “Did my parents feel this way about Sinatra?”

Also, it was personally very hard for me to keep from mentally marveling, over and over, “Paul McCartney is dating my son’s vice principal’s cousin!” Which is true. And which is both incredibly unimportant and also exactly what happens when you get older. Everything gets connected. Thoughts, people. Sometimes even your idols — the ones who made you scream and sob — are now three handshakes away and, like you, getting up there.

I took my 13-year-old son with me to the show, and he said that he liked it. Then he put in his earbuds and started listening to something that may or may not make him feel very old — and very young — in about 40 years.

Lenore Skenazy is the author of “Free-Range Kids: How to Raise Safe, Self-Reliant Children (Without Going Nuts with Worry),” and, “Who’s the Blonde That Married What’s-His-Name? The Ultimate Tip-of-the-Tongue Test of Everything You Know You Know — But Can’t Remember Right Now.”