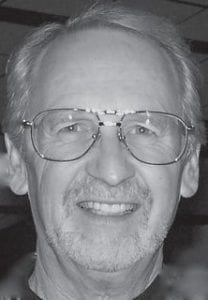 For a kid Christmas is about gifts. Receiving.

For seniors it’s holiday sparkle and glow on faces of kids of all ages.

This week, a Yuletide salute to Givers. You’re one, right?

• At Bellarmine University in Louisville, President Joseph McGowan chanced to meet Robert Striebich a few weeks ago and discovered Striebich had attended Bellarmine in the 1950s but did not graduate. BU’s president made it his mission to locate the 84-year-old’s transcript, then shepherd him through Bellarmine’s graduation ceremony.

Joy of giving is beyond calculation.

Scotty Davenport. The highest ranked college basketball team in Kentucky this week is not UK or Louisville, it’s Bellarmine. The Knights are No. 1 in Division II, have an 8-0 record, and added win number 100 to Davenport’s coaching résumé last week.

When BU’s President presented his coach an award after the game, Davenport paused in the moment then called his team to join him.

“It’s all about the players,” he said. “Our seniors have been around for 74 of these wins, and because of them I think I’m the luckiest coach in America.”

COMMENT. Just wondering, since Rick Pitino and John Calipari have more wins, more media attention, better players and make more money in a month than Davenport will bank in two years, does anybody remember the last time either acknowledged his players and how fortunate he is?

Charlie Strong. Football coach gave his word when he hired on at Louisville. When the Florida job opened, he kept it.

Our state’s heavyweight coaches, and ex-NBA coaches, gave their opinions last week on an NBA franchise locating to Louisville. Neither was a surprise. One was more believable.

John Calipari said Louisville would be a good NBA city. From his perch a safe 80 miles away in Big Blue Nation country, Cal spun the idea that the Memphis Grizzlies franchise was a plus for his Memphis University program.

2. Freedom Hall is not downtown.

3. Historically, Kentuckiana’s devotion to basketball has been and will continue to be in colors Wildcat blue, Cardinal red and Hoosier crimson.

Footnote: Pitino has lived in Lexington and Louisville more than two decades. Calipari hasn’t. Pitino’s view on the NBA issue is dead on.

Moving from philanthropy and coach views to the off beat, consider names some parents give their children. Rivals.com off ered a list of college basketball players’ given names recently. This week, a few favorites with comments from Rivals.Com:

Full name Jabulani means “to bring happiness” and was shortened to Jabs by his sister.

“I like my nickname a lot because it’s short and sweet,” Newby said.

Means dear to the heart. Robin Carter chose Beloved for her son when told the name meant the same as David.

In years since Carter chose the name for her son, his eighth-grade football coach is the only person who had a problem with it.

The coach called him B, Carter said. “He said, ‘I cannot call him Beloved and tell him to go hit someone hard.’”

Meaning: Protagonist in the story Ali Baba and the 40 Thieves, a fictional tale from medieval Arabic literature. In Swahili, the name means “greatest father.”

“It’s because of the story,” Tanza Odd said. “I thought of the name from that and I just liked the sound of it.”

Alibaba Odd has nicknames, from Bobby to Ali to just B.

“People would tease him about it but it is what is,” his mother said. “It’s not changing. It’s his name.”

COMMENT: If the kid becomes a star, his name could make him a product endorsement magnet.

Friends and family knew him by middle name, Akeem for the first 13 years until an AAU coaches discovered his first name.

“The coach told him there were lots of Akeems out there,” his mother Patricia Wright, said. “Then he asked, ‘Why don’t you go by Cashmere?’”

Wright was reluctant, but warmed to the idea when he discovered girls liked the name Cashmere better than Akeem.

His name (o-NO-chi Ochi) may have sounded exotic to childhood friends in Georgia, but the meaning is probably simpler than they imagined.

“It’s a name very popular in our tribe,” Dr. Charles Ochie said. “Onochie means ‘to replace’ and he will be taking my place. It was very, very important for us to give him that name.”

Meaning: “He who supplants.” Derived from Hebrew name Jacob.

Short form of James, Parents might have chosen differently. “My daughter was nine when Jimmer was born and she didn’t like the name at all,” Al Fredette recalled. “She said, ‘That’s a crazy name. I’m not going to call him Jimmer.’ We won her over after a while.”

And last, my favorite …

The name was taken from the late Willie Stargell, team captain of the Pittsburgh Pirates in 1970s who popularized stars on teammates’ baseball caps for outstanding plays.

“I don’t know what it was about Willie Stargell,” Love said. “(Mom) just liked his name, so she named me after him.”

Love has read about Stargell and knows he led the Pirates to World Series titles in 1971 and 1979.

His mom could have reminded her son his namesake is in Baseball’s Hall of Fame at Cooperstown in no small part because, Pops was a jovial, kind and big-hearted giant of a man. A Giver.

Merry Christmas. You may reach Bob Watkins at Sprtsinky@aol.com.