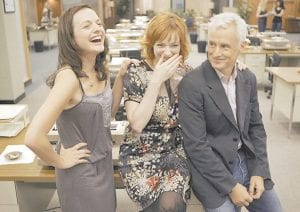 “Mad Men” fans remember how things were really hummin’ last summer, the first for that glorious drama series set in the Manhattan advertising world of 1960. There were lots of twists at the Sterling Cooper agency: Peggy’s unsuspected pregnancy, Roger’s heart attack, the double life of the man we thought we knew as Don Draper.

Here’s an interesting twist: “Mad Men” is being welcomed back with a whirlwind of attention, accelerating what had been a steady build. Critics’ raves and the small but ecstatic audience a year ago were followed by a pair of Golden Globes and then a Peabody.

In recent weeks the show scored cover stories in Entertainment Weekly and The New York Times Magazine, while popping up in GQ and Vanity Fair.

Then on July 17, “Mad Men” was top drama in Emmy’s eyes, with 16 nominations, including those for best series and for star Jon Hamm.

It’s a saga unfolding nearly a half-century ago, with a genrebusting absence of doctors, lawyers, cops or superheroes. And yet “Mad Men” – as contemporary and relatable as anything on TV – seems game to become a mainstream hit.

“It’s not really ‘an advertising show,'” says Hamm, already a Golden Globe winner for his performance as Draper, the agency’s creative sage. “It’s a show about this guy and the problems he has in his relationships, his job, his life and his past – which are problems everybody has.”

The 13-episode season dawns on Valentine’s Day, which is celebrated in various ways. But most of the characters also tune in first lady Jackie Kennedy’s tour of the White House – a TV special aired that Valentine’s evening by not one but two networks and watched by most of the nation.

This is a nation where things are in flux. Younger people are starting to call the shots. Satisfaction is assured for “those who think young” (in the words of a popular Pepsi-Cola campaign).

And it’s a problem for Sterling Cooper, which, instead of cola to advertise, has landed a coffee account.

“No one under 25 drinks coffee anymore,” says account man “Duck” Phillips. “Just Pepsi. They pour it on their Frosted Flakes.” Phillips wants to hire younger writers to reach that young market.

At 36, Draper is old school, a cool traditionalist thinking whatever the opposite of young is. So he’s under even more pressure than last season.

“One of the big questions this year is: What makes this guy happy?” says Hamm. “What makes him relaxed and comfortable? The beautiful wife, the mistresses, the job success and the booze and the cigarettes aren’t the answer. They’re just a kind of balm, with temporary relief.”

During a recent interview, Hamm appears happy, relaxed and comfortable. His leadingman handsome face is freed from Draper’s nearly constant mask of guardedness. Similarly, his jeans, open-collared white shirt and baseball cap (for his hometown St. Louis Cardinals) are in marked contrast to his character’s sartorial style: the Brooks Brothers suits, the wingtip shoes, the sheen of Draper’s slicked-back hair.

Even so, “the role was a perfect fit,” says Hamm, who, at 37, lends Draper the authority of someone significantly older than his years. “I don’t know why it is: I looked old when I was 16!”

Not surprisingly, when he arrived in Los Angeles in his early 20s, he couldn’t snag the teen roles other actors his age were snapping up.

He was cast in “The Division,” a cop show, episodes of “Providence,” ”The Unit” and “What About Brian,” and the film “We Were Soldiers,” as well as appearing in two films written by and starring his longtime girlfriend, Jennifer Westfeldt: “Kissing Jessica Stein” and “Ira & Abby.”

As Draper, he says, “I guess I caught up to my aspect, a persona I could naturally play. It was easy for me. And since I was relatively unknown and didn’t come with a ready-made identity, it was easy for people to see me as a guy who’s mysterious – an unknown quantity.”

Hamm thinks it’s “incredibly fun to play a guy who has a lot of secrets” – while in the position of not always knowing what those secrets are.

“Matt talks about keeping things secret, even from the cast until each script is ready,” says Hamm, chuckling at Weiner’s not-infrequent lapses. “He’s the WORST secret-keeper – all he wants to do is tell you about the secrets he wants you not to know about. So I knew quite a few things about where the first season was going. And it does help.

“This season started with the same promises of ‘I’m NOT gonna tell you anything,’ and then, of course, two weeks in, you hear: ‘I have this great idea! Let me tell you about it!'”

Now that 1962 is just around the corner with a new “Mad Men” season, so many viewers are eager to be told.