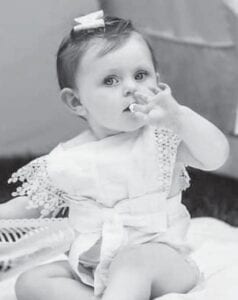 ONE YEAR OLD — Bristol Elaine Knight turned one year old on August 29. She is a daughter of Chase and Kendra Knight, formerly of Neon, now residing in Fairmont, W.Va. Bristol has an older sister, Auburn Claire, who is three years old. Bristol is a granddaughter of Billy and Ava Knight of McRoberts, and Renata Breeding of Neon.

Hello everyone – I hope everyone had a good week. It went by so quickly and it doesn’t feel like it should be over. I’m hoping that next year we’ll be able to do a lot of overnight trips to different places. Staying home is fine but it’s fun to go somewhere.

My cousin, Anne Carpenter of Yazoo City, Miss., retired this week. She had worked for the State of Mississippi Department of Transportation. Congratulations to Anne. I’m sure she will enjoy retirement.

Debbie and Jeff Vice of Flemingsburg stopped by for a while one evening. They came in for a few days but Debbie wasn’t feeling well so they didn’t get to come over until the day before they left. It was great seeing them. When I saw them coming up the steps it reminded me of my childhood. I used to get so excited when Debbie came to visit and that same excitement feeling was there.

Janis and Mike Marr of Berea came in to see her grandpa Glen Brown and her dad John Campbell. Their children, Anna, Myles, Addison, and Tucker, came in with them. They had to go back on the same day and we didn’t get to see them. The two grandpas enjoyed their company. Tucker has sent me text messages through his momma. He’s a sweet little boy.

Mike and I did go to Kingsport, Tenn., one day. Mike started feeling bad but we needed to pick up an order at Home Depot, so I drove there. After getting what we needed, we turned around and came back with Mike driving. It’s always a quicker trip when Mike drives. To all of the Kingsport relatives, it was a short and quick trip so we didn’t see anyone.

We finally moved into our downstairs bedroom. It isn’t all the way done but will be. Mike built us a bed frame as our bed won’t be here until November. It feels good to finally be in that room.

I hope everyone had a chance to see the moon on Sunday evening/night. It was gorgeous.

Happy birthday to everyone.

I left off an August birthday. Happy birthday to Minera Yonts of Indianapolis, Ind. Her birthday was on August 26.

Florene Shearer Biedonkopf of Middletown, Ohio, passed away August 23, 2020 at the age of 85. She was preceded in death by two husbands, John Biedonkopf and James Freeman, along with three siblings, Boyd Shearer, Mary Palmer, and Naomi Shearer.

A memorial service was held on August 29 at Mueller Funeral Home in Mason, Ohio.

Condolences are sent to Steve and Krista Freeman and the rest of the family.

I have seen more masks being worn, which is good. I am starting to see a lot of disposable masks on the ground, which isn’t as good. Please discard your masks in the trash as it is up to us to keep our county clean.

The coronavirus hasn’t personally affected me or those around me. This past week I found out that a man I went to high school with has the virus and is in the hospital. He had a plasma transfusion done. The family said he is improving but is still in serious condition. I hope he has a positive recovery.

This week’s quote is attributed to Theodore Roosevelt. “The most important single ingredient in the formula of success is knowing how to get along with people.”

Please send any news to Cowannews@aol.com. I know you all get tired of reading what I’m doing but I need to know what you’ve done or are doing. Thanks.

Enjoy September and I hope it’s good to all.