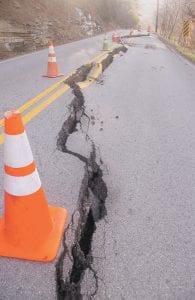 ROAD BREAK — KY 588 at Oscaloosa is breaking off and threatening a house below after heavy rains last week saturated the ground.

Near the community of Oscaloosa, Anthony and Ramona Stamper are moving their belongings out of their home of 24 years as KY 588 threatens to tumble down an embankment and destroy their doublewide trailer.

Orange barrels and traffic cones have cut the road down to one lane as a large crack in the asphalt that is longer than the Stampers’ trailer continues to widen and an entire lane of the road shifts downward.

The Stamper home, located in the Kingdom Come Creek area of Letcher County, is at the toe of the steep embankment, and the edge of the two-lane highway is at the top. The back of the house is surrounded by a steel fence made of large pipes welded together and buried in post holes.

“I built that to protect the house after a tractor rolled over the hill,” Anthony Stamper said.

But a fence won’t stop a mountain. The steel poles are planted firmly in the muddy soil, but then so are the trees. And down below the road, below the steel fence, tree roots are being pushed out of the ground and the home in which the Stampers raised their children is moving slowly toward the Kentucky River about 50 feet away. 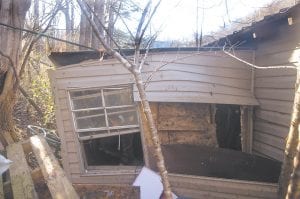 MOVING HOUSE – A landslide caused by water entering a break in KY 588 is slowly crumpling a house down a steep slope from the road.

“It had already been cracking, but this last flooding made it worse,” Ramona Stamper said of the road as she took a break from moving personal items from that trailer to another next door. “We’ve been calling and calling (the Highway Department).”

She said she’s worried what will happen if the rain forecast for later this week actually arrives.

Anthony Stamper went into an addition on the back of the trailer and cut out part of the wall and floor in an attempt to slow down the damage, but the landslide is still pushing and the trailer is slowly leaning on its concrete block piers. 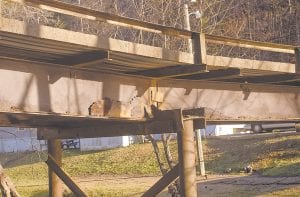 BEAMS UNDER THE HANCOCK DRIVE bridge are separating as a bridge support sinks into the riverbed, and leans to one side. Related story appears below on this page. (All photos this page by Sam Adams)

The state is in the process of seeking a federal disaster declaration for counties affected by the flooding, which occurred when more than 3 inches of rain fell in less than a day. The rainfall saturated the ground, causing mudslides and rock falls, and high creeks and rivers filled with logging debris washed away bridge foundations.

Ward said the county has several bridges downstream from Whitesburg that were damaged in the flooding. The county had reached $93,000 in estimated damages with only a fraction of assessments done. Ward said he expects the total to be one-half to three-quarters of a million dollars.

At Hancock Drive off KY 588, residents are crossing a bridge 20 feet over the Kentucky River that is broken down in the middle and listing to one side, with support beams that are spreading apart as the pillars sink in the riverbed.

Residents said the bridge has been substandard for years, but the flooding last week took a major toll. It’s among the bridges the county hopes to get disaster money to replace. 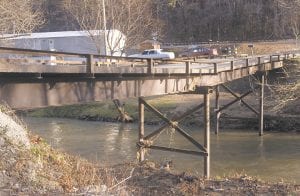 BENT BRIDGE – A bridge across the Kentucky River on Hancock Drive bends in the middle and lists to one side. Residents say the bridge has been a problem for years, but recent flooding has made it even worse. See related story elsewhere this page.

So is the bridge at CSX Drive, which lost its middle support to the roaring flood, and other bridges and culverts across the county.

Ward said he’s hoping, but he doesn’t know how much money the county will get.

“We sent in for them to be replaced, but we may have to figure out how to repair them,” he said.