It’s hard to let go of loved one 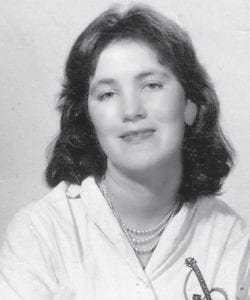 As I write this on Monday, Jan. 29, my mother-inlaw, Evelyn Mullins Yonts, is in the Greg and Noreen Wells Hospice Care Center in Hazard. She was admitted there Saturday from ICU at Hazard Appalachian Regional Hospital.

She is definitely the toughest, most independent, most strong willed person I know. She told me when Dawes, her husband, asked her dad, Walter Mullins, if they could get married. Walter said, “Well I’ll just tell ye, she’s high tempered as she can be, but I’ll not have her mistreated.”

Dawes died in 2006 and she lived by herself until this past summer. She was born in 1928 and so she lived through the Depression. Because of this they knew how to make something out of almost nothing and many times had to do just that.

They had four boys and she loved them so, so much but would always tell me she had always wanted a little girl. When my daughter Joy was born she was overjoyed to have a little baby girl to love on. The four grandchildren born before Joy were also boys. She ended up having only one more granddaughter. 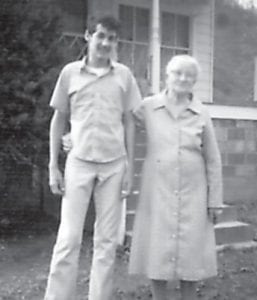 Albert Tacket and Melissa Niece are pictured at the Niece home on Sugar Run.

They raised four of the hardest working, most dedicated men on the face of the Earth, George, Charles, Jimmy and Eugene. They would do anything they could possibly do to help anybody. I think they all four took their independence from her.

Growing up in a house with just boys you wouldn’t think they would show much emotion, but the last six months I have watched all four of them cry until they couldn’t cry anymore at watching their mother suffer and not being able to do anything for her and her not being able to take care of herself. These four big burly men have shown their dedication to their mother during this time like I’ve never seen before. We have all tried to hold on to her and have her live on and on, but God’s plan isn’t ours. And so, in the last two weeks we have all been realizing what God’s will is and we have been saying goodbye for now and we will see you again in Heaven someday soon. Letting go of loved ones surely is tough.

We want everyone to know how special the Greg and Noreen Wells Hospice Care Center and the Hazard Health and Rehabilitation Center really are. Unless you see these facilities for yourself it’s hard to imagine how wonderful they are.

They have both treated all of us as if we were their family and we want everyone to know about them. My childhood friend, Sandra Sexton Wilson, is the Director of Nursing at the Health and Rehabilitation Center. We grew up together on Colson and went all through school together.

Speaking of Colson, I was thinking back to some of the things that took place in our childhood the other day. There was an elderly couple that lived at the mouth of Sugar Run on Colson. They were Big Jim and Melissa Niece. One of their children was Jenetta Niece Howard; she married Eddie Howard, Oma’s brother.

Anyway, Mom would send us to their farm to get fresh eggs and milk. I remember Big Jim’s voice and laugh were deep and when he laughed he laughed with his whole body. We loved going over there.

He would get us to go out and help him gather the eggs and would take us out to the fenced-in area where the barns and animals were. All the animals were loose inside this fence and we had to watch where we stepped because there were a cow and pigs.

The pigs scared me to death because they would come towards us. I guess they were used to him throwing feed out to them or something. But, before we gathered the eggs he would play a guessing game with us and have us guess how many eggs there would be. The one that came the closest would get a nickel.

The milk was in a jar like pickled bologna comes in and we carried it about half a mile back to the house. Only one time did we have an accident with that jar. My sister Charlene dropped it and it broke and of course the milk went everywhere.

She was so afraid that Mom and Dad would be upset and whip her but they didn’t. They knew it was an accident. I can’t believe it just happened once.

Big Jim was nicknamed that because he was very tall. He wasn’t heavy at all. Come to think of in my mind now he reminds me of J.D. Maggard. Daddy loved talking with him and Melissa about older times. Their house was later moved from Sugar Run and placed on down the road on Colson. Tim and Renee Sexton now live in it.

We have been missing Lorraine and Junior Kuracka at the rec center. We hope everything is okay.

We had a wonderful surprise there recently when Faye and Elsie showed up. Faye’s son David was with them and was showing off his new phone Santa Claus brought him for Christmas. He said he must have been a good boy because Santa brought him all kinds of stuff.

Elsie was telling us about her 29-year-old grandson who passed away from the flu. They desperately need our prayers and we are praying for Rhuford and Colleen Hart and Ed and Betty Joe Pike for their health problems. We surely miss seeing them there. Rhuford was one of the fastest walkers I ever saw.

We also need to pray for Jo Ella Taylor Sturgill. She asked for prayers on Facebook because she has pneumonia. Don’t forget to pray for all those that have lost loved ones recently especially my pastor Bill Jones and his wife Sandy.

And I’ll stop here to tell you Oma’s famous ending, don’t forget to try your best to be in church Sunday. If your church has other services throughout the week God would want you there.