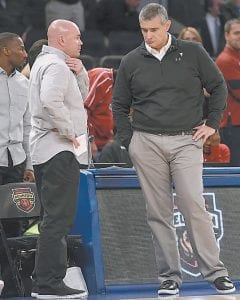 Figger, a son of Patti Figger of Burdine, was part of a South Carolina staff that got the Gamecocks to the Final Four this year in a stunning postseason run by a program that hadn’t won an NCAA Tournament game since 1973. Figger, a a graduate of Jenkins High School and Eastern Kentucky University, worked for Gamecocks coach Frank Martin at Kansas State before following him to South Carolina in 2012.

“We were looking for someone who could bring an excitement and energy to our program, someone who is committed to a quality student-athlete experience, someone who would be involved in our campus and community, and someone that knew and had experience with successful programs,” Austin Peay athletic director Ryan Ivey said in a statement. “Coach Figger brings these characteristics and more, and we couldn’t be more ecstatic to have him leading our program.”

Loos retired as the Ohio Valley Conference’s all-time leader in wins after coaching 27 seasons at Austin Peay. Figger will be the school’s 12th head coach