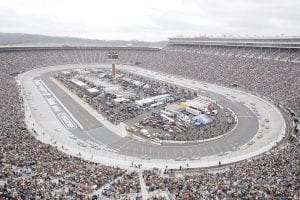 The stands were packed with fans as the NASCAR Sprint Cup Series 500-lap auto race was run on Sunday at Bristol Motor Speedway. Jeff Burton won the race after Kevin Harvick wrecked leader Tony Stewart with two laps to go. The crash was one of the few that occurred on the track which now features variable banking. (AP Photo/Mark Humphrey)

It’s official now – the kind of racing that Bristol was always known for now officially doesn’t exist. To back up that bold statement all one has to do is look at the final rundown of the race and you would see that all 43 cars that started the race were still running when the checkered flag waved.

Usually there are more cars parked in the infield than there are running at the end of a Bristol race, but before you start selling your fall tickets, let’s take a good look at what we did see. Even with all of the rain, two grooves of racing quickly came into play and for the first time that I can remember, the car that could get to the front and keep his left tires glued to the bottom of the track didn’t dominate the race. Passing took place both high and low, which permitted the best cars to get to the front and not be in a gridlock back in the field.

Sure, it is different racing but the sport is changing and this is one track that has apparently kept up with the times by taking a bold step of replacing its famous highbanked turns in favor of the variable banking. If you’re a fan of twisted sheet metal, you may want to think about giving up those hard-to-come-by Bristol tickets. But don’t expect them to sit there unsold, as this kind of racing will continue to make Bristol one of the best stops on the entire Sprint Cup schedule.

One owner that will probably start counting the days until the series comes back to Bristol in August is Richard Childress. For the first time in his long and highly successful Cup career, Childress saw his cars finish 1- 2-3 in a Sprint Cup race. The veteran of Childress’s stable, Jeff Burton, crossed the finish line first followed teammates Kevin Harvick and Clint Bowyer. It was the first win of the year for Childress and it was also the first time this season that a Chevrolet has made it to victory lane.

Even though the season is just five races old, Richard Childress Racing has emerged as the flag bearer for Chevrolet this season as last year’s dominant Chevrolet team, Hendrick Motorsports, is struggling somewhat at this time. Going into the first open weekend on the schedule, Harvick is in third place in the points followed by Burton in fourth with Bowyer sitting in the ninth spot.

Dale Earnhardt Jr. in fifth is the only Hendrick driver in the top 12 with teammates Jimmie Johnson and Jeff Gordon just outside in the 13th and 14th slots. Those two drivers are off to slow starts after finishing last season with Johnson winning the title and Gordon finishing second. Hendrick’s fourth driver, Casey Mears, is also struggling with a slow start as he sits in the 33rd position, just 13 points from falling out of the all-important top 35.

When looking at the standings at such an early point of the season, you have to remember not to get too high or low with where your driver sits as each week there are several drivers on the point’s elevator moving up or dropping several positions. The only concern is that with Toyota showing so much more muscle than last year’s inaugural showing, it may be tougher to hold on to one of the last spots for the Chase as the number of teams capable of finishing in the top 12 after 26 races seem to be at an all-time high.

Pit pass: Michael Waltrip Racing is definitely enjoying the newfound muscle being flexed by those teams piloting Toyotas. This time last season, all three of Waltrip’s teams were out of the top 35 and had to qualify on speed at every stop on the schedule. When the schedule resumes after the Easter break at Martinsville, Waltrip’s three teams will definitely be in the starting lineup as all three teams are now in the top 35. David Reutimann sits in 26th followed by Waltrip in 30th with the car previously driven by the retiring Dale Jarrett in 34th. Waltrip plans to change things beginning at Martinsville. Reutimann will move into Jarret’s #44 UPS ride while his #00 Camry will be driven by Michael McDowell.