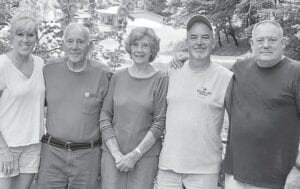 Hello everyone – I hope everyone had a good week. It was a great weekend and we are now officially in summer.

Our son, Greg Wenning of West Milton, Ohio, came in for Father’s Day weekend. He rode his motorcycle for the trip, and he did run into some rain coming and going. It was wonderful spending the weekend with him.

Michael Campbell of Newport came in for the weekend. He came to visit his dad, John Campbell, for Father’s Day weekend. Michael also visited his grandfather, Glen Brown. We also enjoyed spending time with Michael.

On Saturday John, Michael, Mike, Greg, and I went to The Pine Mountain Grill for breakfast. Then for supper we all went to Saxon Mexican Restaurant. We ate a lot this weekend. It was good being together.

Saturday afternoon we all hung out on John’s deck. Company came by while we were there: Gemma, Steven, and Shyanne Bentley plus Mark and Kathy Miles. It was good seeing everyone.

Anna and Duane Yonts had their children in for Father’s Day weekend. Roger and Tracy Yonts of Dahlonega, Ga., Joe Yonts of Jabez, and Amie Daniels of Madison, Ala.. were in for the visit. Joe’s wife Donna and Amie’s husband Jeff weren’t able to make the trip. Anna and Duane enjoyed having their family together.

The granddaughters, great-granddaughters, and a great-great-granddaughter of the late Bernard and Minnie Vae Banks from Little Cowan got together over the weekend. Those attending the cousin retreat in Sevierville, Tenn. were Jill Kent of Wise, Va.; Beth Callahan and granddaughter Charli of Mocksville, N.C.; Renee, Leah, and Audrey Stevenson of Bexley, Ohio; Gwen and Maddie Handlon of Edinburgh, Ind.; and Tori, Callie, Ella Akers of Talbot, Tenn. I went through all the photos they posted on social media and enjoyed them all. It was great seeing pictures of them together and having a great time. I’m glad they added the next generation to their annual get-together. Their grandparents would be so proud of them.

While the granddaughters of Bernard and Minnie Vae Banks were getting together, their daughters got together also. Carol Caudill of Little Cowan, Verna Rayburn of Liberty, and Marilyn Banks of Edinburgh, Ind., spent the weekend with Linda Lucas of Kingsport, Tenn. I saw a picture of them and they were laughing. I’m sure they all had a great time.

Doris Ison of Little Cowan went to Outer Banks, S.C. with her family and they spent a week there. The photos they shared on social media were fantastic and I enjoyed every one of them. Those on this vacation were: Doris Ison; Morgan, Byron, Caroline and Bentleigh Eldridge of Hindman; Frederick, Tiffany, Collin, Connor, and Corbin Eversole of Pikeville; Donna Watts of Letcher and her grandson Eli Gordon of Shelbyville; and Patricia Ball of Little Cowan. They had a wonderful time together. Morgan said she’s already planning the next family vacation.

Michael Campbell of Newport took a two-week driving vacation across the country. He and Portia Watson of Louisville drove to Oregon and did as many states as they could. Michael even took a picture of Riverton, Wyoming for Mike and me. Mike and I lived in Riverton until I retired and moved to Kentucky. Michael did show us all of his pictures and they were great. Michael visited several friends that now live out west. They had a great trip. It has put me in a mood to do a driving trip.

Mike, Greg and I were driving one evening and saw a bear cub. It was in the road and turned around as we came upon it. It was standing by a tree and crying as we pulled up. We didn’t see the momma bear but we were sure she was around. We did get pictures and Greg got a video. It was cute.

Mike killed a copperhead this past week. He said he looked at it and it looked at him. He didn’t want to kill it but it was too close to the house. Mike is getting ready to work under the house and didn’t need a snake nearby.

Addison Marr of Berea sent her ‘Pa’ John Campbell a story she wrote. It is called “John The Bear”. It is a good story with pictures. Addison even added John’s dogs, Buddy and Lady, in the story. Addison is the daughter of Janis and Michael Marr of Berea.

Hannah Harris of Shelbyville has a new job. She will be working as an Early Childhood Services Coordinator with the Cabinet for Health and Family Services in Louisville. Hannah is the daughter of Laura and Mike Harris of Lexington and the granddaughter of Bob and Ramona Caudill of Little Cowan.

Timothy Dean Halcomb, age 60, passed away June 16, 2020. He is survived by his wife, Lisa Polly Halcomb; his daughter, Victoria (Michael) Watts; and granddaughter, Ruby Watts. The funeral was June 18, 2020 at Letcher Funeral Home. Condolences to the family.

My grandpa AKA Pa was Cassel Caudill and he used to tell the greatest stories. One of my favorites was about him riding a horse when he was about ten years old. He had ridden a horse somewhere and was heading home when it started raining. He was getting stung in the face by the rain as he was riding and the horse was going slower. He decided to turn around on the horse so the rain would hit him in the back and it wouldn’t hurt as much. He turned around and the horse continued slowly while Pa was looking behind the horse. Then the horse stopped, turned around, and was facing the way they had just come. Now Pa’s face was being hit by the stinging rain but the horse was protecting his face.

Pa would laugh when he got to the end of this story. It’s always been my favorite. My recollection of the story may be different from someone else’s but it’s how I remember this story.

This week’s quote is attributed to Dr. Joyce Brothers. “When you look at your life, the greatest happinesses are family happinesses.”

I hope everyone has a wonderful week.

If you have any news please email me at Cowannews@aol.com.