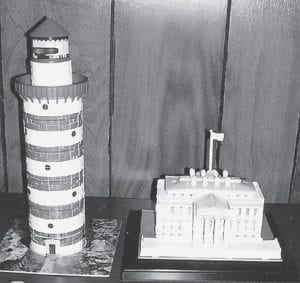 Lizze Mae Wright of Mayking worked these 3-D puzzles and brought them to the Ermine Senior Citizens Center. The puzzles form a lighthouse and the White House.

As usual I stayed home, and when you are alone you can’t get into too much trouble.

I have really been a different person as it has been a couple of weeks since I have been out dancing! I am about ready to break out and get going. I am like a bear; I think I am about to hibernate.

All I need is a good bluegrass fix with RR2 Bluegrass Band with Gary Eldridge on the mandolin or Bluegrass Favorites with Tony Hale or Special Delivery to perk me up.

I hear so many people complain once again about the cold temperature. Especially when I am out in it for short period of time, it always makes me wonder how homeless people stand to be outside living in cardboard boxes or leanto shacks like I observed down by the Ohio River in Cincinnati.

There are not enough clothes for me to put on to keep warm so I don’t stay out in this weather and actually we haven’t really had too much freezing like we usually do. Oh, we still have time yet!

My brother Jerry Hall is in the hospital. I am about afraid to travel, not knowing the weather situation. When things happen in our family it seems there’s always a copycat as Friday afternoon I became very ill and fought as long as I could. I finally had my friend Vickie Power call the Life Squad for me, and after four hours in the hospital and a bag of fluid, I was released to come home. Nothing serious, just a little soreness.

Betty Ison recently had a knee replacement and she is coming along remarkably. Doyle will have to tie her down once she has completely recovered.

It is wonderful to see her so pain free as I have watched Betty deteriorate from time to time when I was there. Betty will be able to be as active as always. Doyle is so good and patient with his family.

Now if Doyle will just fix the little building in the back so I can move there. There’s just enough room for me.

Betty has two wonderful sons, Mike and Randy, who are really great to be there for Doyle and her. The same way with their grandsons and their granddaughter.

Vickie and I did finally go visit Betty as I had been sort of puny and didn’t want to go see her when I was afraid I was contagious.

Before you could say Jack Spratt, I had the car parked and Vickie and I were strolling through the arches. Oh, it was wonderful.

I wish my daughters and I had gotten together along with Vickie to go to Cincinnati Zoo and different places to enjoy the lights.

There’s been so much sickness in our family the past few months, and everyone else’s too.

Kay’s oldest son C.J. Gray and his wife Shannon are expecting their first child after being married several years. Shannon is a very petite woman and is having quite a bit of problems.

I teased Kay by saying while she was gone my friend and I were going to get in her hot tub while it was snowing. The joke was on me as the hot tub went on the blink. Just my luck.

I’ve heard how relaxing that being in an outside hot tub is when it is snowing so I want to find out for myself. Kay had invited me to try this before and I laughed and said there was no way. I changed my mind and decided to try it.

Les and Pat Wagner along with Larry and Becky Hasty and their family have really enjoyed spending time with each other. Larry and Becky have a couple of grandchildren who have the great privilege though they’re too young to know it, to almost have an extra set of grandparents with Les and Pat. This one of the most caring families that I have ever been around.

Pat called to see how I was feeling and I really enjoyed our conversation. I just wish I were as great as Pat thinks I am. I consider myself very fortunate to have the utmost pleasure to have met Pat and Les and everyone, and to really be made to feel like part of their family.

During the time I have been writing for The Mountain Eagle, my life has really been enriched by meeting Betty and Doyle Ison, Gwen Huff Farmer and her very special brother Clarence Huff, Oma Hatton, Emma Engle, Clarence and Arlyn Halcomb, and oh my the list could go on and on.

I am not meaning to single anyone out, these are just a few names that popped in my head.

I wish it was possible that Thelma Brooks could get her Mountain Eagle started back again as I know she misses it. If I could afford to, I would pay for her subscription.

I am really enjoying the connection to my cousin Marty Hollins, who lives in Athens, Ga. Again this is possible through the Eagle.

I talked to Gwen Huff Farmer for a little bit and Gwen has been real sick for several weeks. She did say she was feeling a little better.

Marty and I correspond quite a bit on the computer. I feel such a deep connection to this kid as Marty is the same age as my daughter Angie Wiederhold.

Sunday was Old Time Fiddlers meeting and during the meeting my cell phone rang. It was Angie telling me that my little sidekick Bennie was wanting to know if I would pick him up Wednesday. Angie laughed and said she had no idea why Bennie picked Wednesday, as he is only five and has no concept of a certain day. All at once I heard Bennie say, “I changed my mind. I want Mamaw to pick me up Sunday.”

I was too tired last night, but you can bet I will be there to get him this week.

Bennie will be six years old on Jan. 30. That doesn’t seem possible. Many of you readers have read of his growing up as I was watching him every week.

The same with my other grandchildren. Now the girls are getting where they have so many other interests. My granddaughter, eight-year-old Katelyn Nottingham, still seems to want to spend time with me.

Congratulations to Letcher County Central High School Band. That is really something to be proud of.

I know the pride I felt as a grandparent when my granddaughter Sarah Nottingham’s school, Beechwood High School, was chosen for state championship for two consecutive years.

My sister-in-law Wanda Hall is trying to settle down after the holidays and get things back to normal, if it will ever be normal for her again. I am glad she is still in good health and can work, as I know staying busy helps a lot as it keeps her occupied. There’s not a day goes by that I don’t long just to pick up the phone and call my brother Richie just one more time.

I don’t mean to slight my other siblings, but it is no secret that Richie and I had a special bond. I believe it was because he was born so close to my birthday. Richie spent a lot of his childhood summers with my family.

Johnny and Ann Calihan’s daughter Sue Wagner is still recuperating from her serious illness. Sue sure was a very sick girl, and it came on her so sudden.

Bessie Shepherd, when it gets warm and I get back to the mountains, you and I are going somewhere and see what trouble we can get into. Maybe we can even talk Jon Caudill into quit working long enough to buy us a Coke.

Please keep my cousin Beverly Adams and her family in your prayers as Bev is facing a lot of medical issues. Their son, Little Jack as I call him, should be enjoying his teenage years, not worrying about his mom.

Shirley Wells’s daughter Loretta Baggett, compiled a photo album of 2012 happenings of the family. I was totally surprised to see a picture of Shirley and me in it when we met in Nashville, Tenn., last February.

Belated birthday wishes to my sister Loretta Church, Jan. 2. I wanted to call Loretta and couldn’t find where I had put her telephone number.

I have to get this on its way so stay warm and give each other an extra hug as we don’t know what tomorrow brings.