It’s time to dress up popcorn 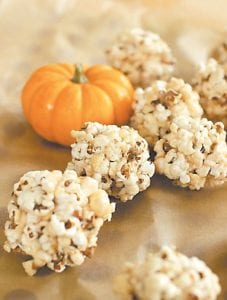 This photo shows marshmallow popcorn balls. You can go either sweet or savory when making popcorn treats. (AP Photo)

Whether you are hosting a graveyard’s worth of spooks or need to supply the treats for a classroom party, this year consider ditching candy in favor of an easy treat you can cook up yourself. I’m talking about popcorn. It’s not only tasty, filling and easy to prepare, it’s versatile, too. Make it sweet and it’ll win with the kids. Having an adult party? Make it savory!

Start from scratch by popping the corn kernels on the stove. Those microwave bags of popcorn from the supermarket? You don’t need them. Sure they’re convenient, but most of them also are filled with additives, including hydrogenated fat, artificial colors and flavors, and way too much salt.

My recipe for stovetop popcorn cooks up in a jiffy. As in just 5 minutes start to finish. In fact, the whole process is over so quickly that I urge you to stay near the stove until all the corn is popped. I’ve also minimized the danger of burning by specifying a pan that’s just the right size, one that allows you to set out the kernels in a single layer.

With the corn popped, you can then go sweet or savory. For adults, there are Parmesan-garlic and blue cheese-hot sauce options. (Either version also would also score big on Super Bowl Sunday). For kids, there’s marshmallow popcorn balls (with an optional dash of cinnamon) or doublechocolate popcorn balls. And neither kid option requires any special candy-making skills. You just melt and mix the ingredients with the popcorn, then shape it into balls after it has cooled, a job the kids might want to help with.

Place the oil in a large saucepan at least 8-inches across at the bottom. Add 3 popcorn kernels, cover and cook over mediumhigh heat until the kernels pop. This lets you know when the pan is hot enough.

Remove the pan from the heat, add the remaining kernels and return the pan to the burner. Cook the popcorn over mediumhigh heat, covered, with a tiny gap to let the steam escape, shaking the pan occasionally until the popping noises slow down to once

every 3 to 4 seconds. Remove from the heat. Use the popcorn in one of the following variations:

In a small saucepan over medium-low, heat the butter and the garlic until the butter is melted. In a large bowl, toss the popcorn with the butter mixture. Add the cheese, toss, then season with salt and pepper and toss again.

In a small saucepan over

medium-low heat, melt the butter. Add the cheese and hot sauce and stir until the cheese is melted. In a large bowl, toss the popcorn with the cheese mixture.

In a 9-by-13-inch baking dish, spread out the popcorn in an even layer. In a medium saucepan over low heat, combine the butter and salt and cook until the butter is melted. Increase the heat to medium, add the marshmallows and cinnamon, if using, and cook until melted, stirring constantly. Pour the mixture over the popcorn and quickly mix until all the popcorn is well coated. Let the mixture cool slightly. Oil your hands and form the marshmallow mixture into 12 balls.