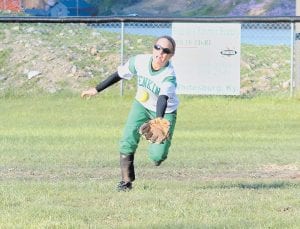 Jenkins right fielder Sara Belcher hustled to make a nice catch in the Lady Cavaliers’ 5-3 loss to Johnson Central in a 14-inning game on April 17. Jenkins has rebounded from a tough start to the season but is still searching for a winning record after dropping four of the six games it played during the last week, including three in a round-robin tournament in Somerset. Trailing 3-2 in the 6th inning, Johnson Central tied the game and eventually took the lead in the top of the 14th with a tworun homer. The Lady Cavs later picked up a victory over Magoffin County and advanced to the championship game of the All-A Tournament with a win over Jackson City on April 17. The championship game was postponed because of bad weather on Tuesday.