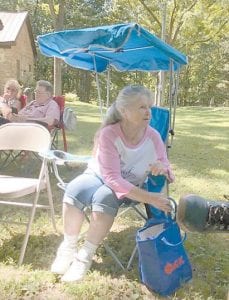 Oh the weather is so delightful in the Ohio Valley area, except the coolness of autumn has happened the last two days. Oh I am not ready for this no matter how beautiful the leaves and scenery will be. Yes I will enjoy the changing of seasons as it is converted into God’s coloring book. Autumn is such a wonderful time, however it is far too short then comes the cold, icy, long winter months that never seem to end with its short days and long, cold nights.

The mountains are calling to me once more. I really think I need to just rent someplace from May through November. I may just do that, as I will have a standing reservation.

I have several invitations to stay with friends. I appreciate every time someone says, well you are welcome to stay with me. I am so restless, awake all hours of the night that I prefer being alone. When Vicki Power travels with me, we share a motel room, simply because Vicki has been here for me through thick and thin. She has taken me so many times to the ER and sat with me while I was so sick I couldn’t help myself. I have called Vicki lots more times than I called my children. Vicki has followed the Life Squad when I have been transported by ambulance from one hospital to another hospital. Because they couldn’t insert IV’s, I needed a pick line crew.

Vicki has been more of a sister than just a friend. We both like Hallmark movies, and we keep the television on at night; it doesn’t bother either of us. The only thing that bothers me, is I like to write at night and I won’t turn on the light afraid I will disturb her.

That brings me back to the main reason I like to travel alone. I don’t have to worry about anything or anyone.

Daphne Korner and I went on an adventure Saturday evening. After a few times around the same blocks we finally ended at our destination at Clifton Plaza, Cincinnati, Oh. I have driven through this area several times not knowing the secret that was hidden between two buildings on Ludlow St. known as Clifton Plaza Ma Crow & Co. were scheduled to perform there. Needless to say, the venue was in a secluded location with such a wonderful atmosphere as darkness descended.

The high buildings on both sides were apartments, then in between the buildings were multiple strands of bare light bulbs that illuminated such a beautiful glow. The only thing there was a tinge of coolness when the wind blew. No one else seemed to mind, but I chill with the slightest touch of wind blowing, especially where my wrist and ankle are broken. It was a delightful way to spend three hours, listening to Ma Crow & Co.

Sunday afternoon, Daphne and I ventured to Indian Creek Mound to the old church to the jam session that Warren and Judy Waldron host during the last Sunday of each month of summer. I’m sorry to say this was the last one until next May. Oh what a beautiful afternoon, the temperature was excellent.

Jack Adams, banjo picker for Sunrise Ridge, has been given the opportunity to join Larry Efaw & The Bluegrass Mountaineer band. I know that Shawn Stamper hates to lose Jack Adams, yet Shawn graciously gave his approval as Shawn knows this is a great opportunity for Jack to advance, and to fulfill a dream that Jack has had since he first started to learn to pick the banjo.

Of course anyone that reads my column knows that Sunrise Ridge has been a lifeline for me. I’ve traveled many a mile to and from the mountains of eastern Kentucky just to see and hear this band at Campbell’s Branch and Carcassonne Community Centers on Friday and Saturday night.

It is no secret Jack Adams is my second cousin, that is just icing on the cake as far as the band. Every member of Sunrise Ridge is so special

When Jack was in high school, even though he was very shy, we would correspond by computer. Jack would want to quit school, and of course I would encourage him to continue with his education. Jack replied all he wanted to do was play bluegrass music. I kept encouraging him to get an education, as there wasn’t that much money to be made in bluegrass music. I used Ralph Stanley as an example. Jack started out picking for almost nothing, then when the movie “O Brother Where Art Thou” was produced. Jack did graduate from high school, losing his mother, Beverly Adams, who was his number one fan, along the way. This young man has overcome a lot of obstacles in his life. Jack started cutting grass to earn money, even has his own landscaping business, which I understand has done well.

Sunrise Ridge performed at Osborne Bros. Festival at Hyden Aug. 4. Larry Efaw & Bluegrass Mountaineers performed on the same show. The two bands were scheduled back to back as Larry Efaw was planning on leaving early due to some unforeseen circumstance. Sunrise Ridge played a certain number called I hear a Choo Choo Coming. When Larry Efaw heard Jack Adams kick it off, Larry was mesmerized. He seriously stopped to listen. Larry got in touch with Jack and hired him just a short time later.

You may wonder how do I know this information. I’ve know Larry Efaw at least 21 years. Larry had met Jack a few years ago at the Ralph Stanley Festival. He had forgotten it, the same with Jack. Larry had also forgotten Jack was my cousin.

If Jack is going to follow his dream to venture the path of bluegrass music, I am so thankful Larry Efaw chose this young man. Larry is a family man, his wife Lisa is a wonderful person. Jack is in good hands as he takes his first step into a different world. How I wish Beverly Adams could been fortunate enough to know all this. I am not Jack’s mother as we all know, however I couldn’t be more proud of this young man if he was my own kid.

Larry’s wife Lisa has to have extensive surgery so Larry is taking a break from music for a short time to be with Lisa. Dec. 11-14 is Christmas in the Smokies Bluegrass, Pigeon Forge, Tenn., on Friday, Dec.13, Larry Efaw & Bluegrass Mountaineers are scheduled. Tentatively this will be Jack’s first show. If God is willing and weather permits I hope to be in the audience.

Welcome to the world of bluegrass and safe travels, Jack, as you will have the time of your life, along with many a mile of being so tired you forget where you are at, even forget your instrument. Ask Larry Efaw about that episode. Last year when he played Osborne Bros Festival, he left his mandolin. He got so excited to see me.

Johnny and Ann Calihan are still having episodes of health issues. Ann has to go to something called wound care, as her leg isn’t healing. Ann is a diabetic and things just don’t heal as they should. Their daughter Sue Wagner from South Carolina is visiting due to Sue having doctor visits in Cincinnati. Sue found time to take Ann shopping. I knew Ann couldn’t walk so I suggested Sue take the transport wheelchair that I finally retired. Ann really enjoyed the shopping trip, except she was exhausted after the trip.

I hope Les and Pat Wagner are improving.

Belated happy birthday to Rachel Caudill, who celebrated 92 years. She is the mother of Mary Ann Caudill and precious mother-in-law of William Caudill of R#7 bluegrass band.

Time is catching up with me. Until next time.