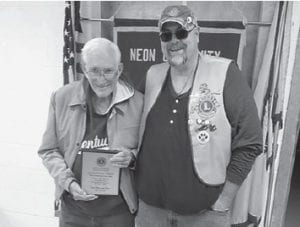 A moderate crowd of members was present along with a few guests, including Buddy Grub and the Fourth Region Lions Club Chairman Wesley Doughman.

The meeting began with a Lions Club presentation as Lion Mark Wagner referred to this moment as a “bittersweet” gathering of members, friends, and family, for their friend of many years, recalling his dedication to the club and community.

Lion Jack Morgan was then presented with an awards plaque for his service by Lion Sam Quillen.

Lion Jack Morgan informed us that he has sold his home in McRoberts and closing will be this week, after which he and his wife will be moving to Hazard to live near their daughter.

After the presentation and the taking of pictures to commemorate the occasion, Region Four Chairman Wesley Doughman presented two current members, Marshall and Rick Bevins with a 15-year Milestone Chevron for their dedication and service to the club. 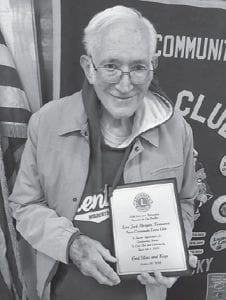 Jack Morgan received an awards plaque for his service to the Neon Lions Club, of which he is a longtime member.

The minutes of the last meeting were then read and accepted, reports were given, and old business was discussed, as a report was given concerning the Blackey Days Festival where members of the Neon Community Lions Club were present.

Throughout the day’s event the club was accepting donations for the ‘Golden Boy” Henry .22 caliber rifle that was given away. The winner was Tanisha Cornett of the Hazard area.

The Neon Community Lions Club wishes to take this opportunity to thank everyone who donated and helped make this a successful event.

Also, during the Blackey Days events, the half-andhalf ticket winner was Michelle Caudill.

A few members of the Lions Club were also busy this week helping to disassemble the playground equipment at the Fleming-Neon Middle School, which through a joint effort of the school, the club, and the Neon Little League, will be moved to the Little League Park at Goosecreek.

Also, a motion was made and accepted to make a donation to the relief effort of Hurricane Michael with a call of all local, state, and national Lions Clubs to concur with a donation of their choice.

Also discussed was contacting the local TV cable systems to air a spot on their home page the club’s meeting dates and time.

This is the month of Halloween, and on Halloween night from 5 to 8 p.m. members of the Neon Community Lions Club will be on the street of the city to help celebrate the occasion with the children.