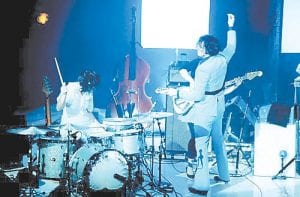 An abundance of music legends have found themselves performing between the historic walls of Nashville’s Ryman Auditorium. Such legends include Elvis Presley (October 2, 1954), Jonny Cash (July 7, 1956) and Patsy Cline (January 9, 1960).

The venue’s impeccable track record continued May 16 as Jack White found himself on the same stage that so many of his musical infl uences graced decades before. The lucky ticket holders to this sold out show at the Ryman formed a diverse crowd of all ages. With his retro blues sound accompanied by his masterful guitar skills, White is one artist that every age could agree on.

White, a former member of the groundbreaking Detroit duo The White Stripes and present day member of The Raconteurs and The Dead Weather, has enjoyed previous success. He was recently ranked as Rolling Stone magazine’s 17th greatest guitar player of all time. White’s success continues to grow this year after the release of his first solo album Blunderbuss in April. The record, which was released through White’s label, Third Man Records, debuted at No. 1 on the sales charts. All of these factors have led to his first solo tour becoming the ticket of the summer.

As the lights dimmed, the setting sun beamed through the venue’s stained glass windows, leaving the auditorium streaming with an array of lights as the opening band walked on stage.

Originating from Athens, Alabama, the retro-rockers Alabama Shakes released their first album this spring and already have a dedicated fan base. They were immediately welcomed to the stage with applause as lead singer Brittany Howard smoothly sang the intro to their hit “Hold On.” With her soulful voice and the band’s retro sound, the audience members that were not already fans were easily won over.

After the Shakes left the stage, White’s stage techs, dressed dapperly in black suits with baby blue ties and black caps, prepared for the headlining show.

After the crowd put away their cell phones and cameras at White’s request (he makes photos of the tour available for download at www.jackwhiteiii.com), the show was ready to start.

As the crowd grew silent, White’s all female band The Peacocks glided onto the stage, instruments in hand. Wearing vintage dresses glowing in pastel blue, the band matched not only the technicians, but also White himself. Sporting a baby blue suit as he shimmied to the microphone, White made it clear that he was happy to be back in his new home of Nashville.

He began the show with two songs from his debut solo record, “Missing Pieces” and “Sixteen Saltines.” The fans reacted positively to the not yet familiar sounds of his new material, but found comfort in the songs that made them all fall in love with White as he sang songs from his previous bands The Raconteurs (“Top Yourself” and “Steady as She Goes”), The Dead Weather (“Blue Blood Blues”) and The White Stripes (“Black Math,” “Slowly Turning Into You”).

White also sang a cover from Ryman alumni Hank Williams Sr. (“You Know That I Know”). When heand The Peacocks left the stage, the crowd immediately started to chant the opening beats to The White Stripes’ now-iconic song, “Seven Nation Army.” Clearly amused, White returned and acknowledged the crown with a grin and a chuckle.

After he and The Peacocks settled back into their positions on stage, White sang “Freedom at 21,” “The Hardest Button to Button” and ended the concert with “Ball and Biscuit.”

Through the entire concert, White proved that at only 36 he deserves to be among the legends that had previously graced the stage of Nashville’s famous Ryman Auditorium.

5. “Weep Themselves to Sleep”

8. “You’re Pretty Good Looking (For A Girl)” (The White Stripes)

10. “Dead Leaves and the Dirty Ground” (The White Stripes)

15. “Finding It Harder To Be A Gentleman” (The White Stripes)

19. “The Hardest Button to Button” (The White Stripes)

Sisters Cassidy and Kennedy Breeding will be sophomores at Letcher Central.