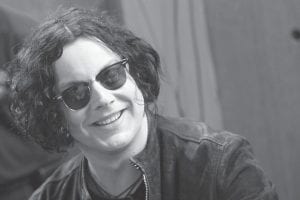 AT THE TOP — Former White Stripe member Jack White has released his first solo album, “Blunderbuss,” which shot to No. 1 on the Billboard album charts. (AP Photo)

Jack White is musing on his latest color scheme.

The former White Stripe has bathed his first solo album, “Blunderbuss,” with a pale blue palette. It informs the album artwork, the touring stage presentation and the outfits of his backing band, which alternates between all-male and all-female lineups.

Since he was a teenage upholsterer in Detroit, White has carefully color-coordinated his work. While recording “Blunderbuss” in his studio in Nashville, Tenn., White played on a pale blue telecaster and an old pale blue amplifier.

“I said, ‘Well, these are my hand tools. It’s all going to build up from this,’” says White.

After funneling his songwriting through various band conceptions — the White Stripes, the Raconteurs, the Dead Weather — White is directing his latest production without artifice. Or at least, less artifice.

“The funniest thing is that every album I’ve done and every band I’ve been in have been happy accidents, including this one,” says White, speaking from his home in Nashville. “If you just write songs and don’t tell them what to be — don’t tell the song to be a country song or a rock ‘n’ roll song — then it becomes what it needs to be in the end.”

“Blunderbuss,” which debuted on the Billboard album charts last week at No. 1, according to Nielsen SoundScan, was particularly unplanned. When the rapper RZA didn’t make it to a scheduled session at White’s studio, White decided to start working up some songs of his own. It wasn’t until well into the process that those in the room — a collection of session musicians and others — understood the project taking shape.

“I didn’t know we were actually making a solo record until he started wanting to sing on it,” says engineer Vance Powell, who’s frequently worked with White. “There was never any conversation: ‘OK, we’re going to start my solo record today and I want it to sound like this.’”

Instead, White worked in the orchestrating mode he became accustomed to while producing dozens of albums and singles for his label, Third Man Records.

“Doing it to my own song was something brand new,” he says. “When you’re in a band, if I’m in the Raconteurs, I don’t walk around the room and tell everyone what to play. I say, ‘Here’s my song’ and the drummer plays what the drummer wants to play. I don’t tell people what to do.”

Third Man prizes analog recording and limited-edition vinyl releases. It has released everything from a single by Tom Jones (the recent “Evil”) to a track for the Alabama Shakes (the southern rock sensation that will join White on tour) to an album by Karen Elson (White’s ex-wife and mother to their two children, who also sings back-up on “Blunderbuss”).

“He pushed me real hard but I think he pushed me right into the 21st century,” says the 74-year-old Wanda Jackson, whose “The Party Ain’t Over Yet” was produced by White. “I would liken him to a velvet-covered brick. He’s going to get his way.”

White’s method on “Blunderbuss” was to “shake it up day to day.” He would scrap songs and reform them in another style; call in the female band one day and just the guys the next; feign a prepared song and improvise something on the spot. The opening riff from “Sixteen Saltines” came out of simply trying to test the reverb.

White, widely considered a guitar virtuoso, also continues to push the screechy texture of his playing. The dual-tracked solo on “Weep Themselves to Sleep” is a highlight.

“Nowadays, to put a ‘guitar solo’ onto a record, it better be pretty damn good,” he says. “If I’m going to play a guitar solo, I better be breaking the whole song apart.”

One riff of White’s could reasonably be called one of the most widely celebrated. His guitar line on the White Stripes’ “Seven Nation Army” is routinely sung in sports arenas around the world — a remarkable reverberation for a two-piece blues band.

“The part I love about it is people are chanting a melody, not lyrics or a rhythm — which is pretty, pretty amazing” says White. “You don’t own it anymore. It’s everybody’s.”

The White Stripes, the duo of White and drummer Meg White that produced six studio albums before officially splitting in 2011, remains a foundational experience to White. He can sound slightly wistful about the group.

“The truth is it’s the most challenging thing that ever happened to me,” he says. “There was no bigger challenge than that — to try to win people over with just two people. It will be hard for me to ever think of something to challenge myself as much as that because of its simplicity.”

One might expect a solo record to be a more direct line into White, and perhaps if you add up the ingredients — the Rhodes piano, the mirrored effect on a drum beat, the howl of rebellion — it is. But don’t go reading the tea leaves for song meanings. He writes, he says, as he always has: in the guise of a bluesman singing about “some kind of stories, some kind of struggle.”

“I never look at any of my songs as being first person, ‘This is about me,’” says White. “I’ve never written in that style, and if even if I did, I probably would never tell people that I was. It would be too close to home to give that away.”