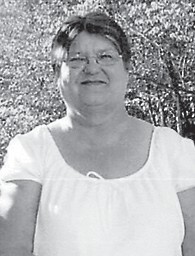 Jackie Marie Sexton, 63, died September 13 at her home in Blackey.