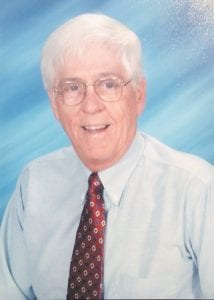 Although Arthur “Ozz” Jackson has retired as Letcher County Central High School athletic director, he will still be a fixture at most home games.

“What else is there to do?” asked Jackson, who has been retired since June 10.

For the past eight years, Jackson, 71, of Solomon, has juggled various athletic schedules and made a point to attend every home game and many away games.

“If we had two at the same time, I’d go to the half of one and half of the other,” said Jackson.

Jackson began his career in education at Whitesburg High School in 1970 as a social studies teacher. He was assistant football coach and assistant basketball coach. Jackson doesn’t remember what year he started helping with the administrative side of athletics.

“Gene Horn was principal and he asked me if I wanted to do paperwork for athletics,” he said. “It kind of got me started. I just took on more and more responsibility.”

At WHS, Jackson taught law and justice, American government and American history in the mornings and spent the afternoons as the athletic director.

When Fleming-Neon, Letcher and Whitesburg high schools consolidated in 2006, his responsibilities increased.

“It went from eight sports to 28 sports,” said Jackson.

The number of athletic fields increased including a new football field with turf, a baseball field, a softball field, tennis courts and a golf green.

“The facilities we have at the high school are second to none in our area,” he said.

“It was good,” said Jackson. “I enjoyed every minute of it. I liked what I did.”

The LCCHS girls’ basketball team, coached by Dickie Adams, winning the regional tournament and playing in the state tournament the first year of the new school is one of Jackson’s favorite athletic memories.

“That was a special time,” he said. “We have gotten a lot of re- gional championships at Letcher Central.”

Jackson was elected to the Kentucky High School Athletic Association (KHSAA) board of controls in 1992. He served three four-year terms.

“I really enjoyed what I did and I hope I made a difference,” he said.

Jackson says he has more time to spend with his two grandchildren who live in Lexington. He wants to go to their tennis matches and football and baseball games.

LCCHS Head Football Coach Mike Holcomb and LCCHS teacher Mike Melton are co-athletic directors although LCCHS Principal Stephen Boggs said there isn’t a clear cut definition of what duties each will have charge.