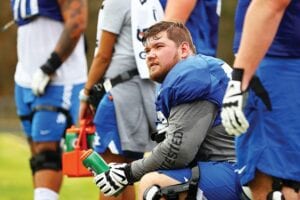 He’s been piling up preseason honors the same way he has piled up successful blocks, but Kentucky senior center Drake Jackson won’t let the accolades go to his head.

SEC Network analyst Cole Cubelic ranks him as the Southeastern Conference’s best returning center. Pro Football Focus ups the ante by ranking him as the most valuable center returning to college football. He’s been named to every preseason all-SEC team, is on the watch list for the Outland Award given to the nation’s best offensive lineman, and has been on All-American preseason teams.

Some players talk about living their dream. Jackson truly is.

“It’s one of those things that no matter how much I try to sit down and reflect and think about, this is where I wanted to be and really was my childhood dream,” Jackson, a Woodford County High School graduate, said. “I am from small-town Kentucky. Never imagined this happening. I am getting publicity like few linemen ever do.

“It still blows my mind every time I see that. Part of me says there is still so much more I can prove. So as glad as I am to see it (preseason recognition), that’s not my end goal. That is not all want.”

Depending on how the 2020 season goes — if there is one — Jackson could leave UK being regarded as the best center ever to play for the Wildcats, a possibility he downplays even though in 974 pass-block snaps he’s allowed just one sack. He also had 44 knockdown blocks in 2019 to earn first-team all-SEC honors.

“Look at the whole of what Coach Stoops has done and all these honors are a testament to how he recruited and developed players,” Jackson said. “I have been teammates with the best running back (Benny Snell) at UK. Played with the best defensive player (Josh Allen) out of UK.

“Before it is all said and done, there are a couple of other dudes who might be the best to come through at their positions. Probably the best kicker in Austin McGinnis. Maybe the best punter (in All-American teammate Max Duffy).”

Jackson said the common denominator with all those players is Stoops, who came to UK with a vision he sold and one that players bought.

“You can judge a coach’s career off what his individual players have done and how he has elevated the program,” Jackson said. “For him to have already had the best kicker, punter, running back, defensive player and some of the best offensive linemen says a lot about him.”

Jackson was part of huge instate recruiting trifecta for Stoops when he signed along with Lafayette offensive lineman Landon Young and Paintsville linebacker Kash Daniel. Signing that trio solidified Stoops’s stature with many UK fans.

Jackson had to redshirt the 2016 season when both Daniel and Young were playing. However, he certainly has no regrets about that because it allowed him more time to change as a person, which led to changes in how he played.

“I have changed more as a person (than player) and that has helped me change as a player. I am a firm believer it clicks at different ages for everybody. Your ability to understand responsibility, accountability, discipline are big fancy terms. It just clicks,” Jackson said.

“It clicked with Josh Paschal as a freshman, clicks with some guys five years out of college. I was very fortunate that my freshman year I was forced to have to figure it out because of my situation.”

Not only did he not play as a freshman, he was on the bench the first four games of his redshirt freshman season in 2017.

“I had to change how I handled my business and that made me a more mature person and made me a better football player. It’s not like I learned technique and started hitting heavier weight in the weight room. It was about mindset,” Jackson said.

“That is what made me better. I got to work on my technique and did get stronger, but huge improvements come when you learn how to think and prepare. You become a smarter, more well-rounded person and that will make you a better player because it makes you think different.”

Alabama native Dave Hopewell, now an insurance agent in Harrodsburg, was the starting center on UK’s 1976 Peach Bowl team and 1977 team that went 10-1. He’s been a fan since his graduation and seldom misses seeing a game.

Is Jackson the best center he’s seen in his 40 plus years as a UK fan?

“Jon Toth was good and was bigger, but overall Drake seems to have all the unique tools a great center needs. He has the size to play center and certainly has the football savvy to do it,” Hopewell said. “Overall the best? I would say so.”

Hopewell says giving up just one sack while making 33 straight starts tells him not only does Jackson have great technique but also studies opponents.

“You can tell he is very coachable and knows his technique. His footwork and hands are really good. He can get in front of people, get his hands up and keep them off. He doesn’t make mistakes. He knows where he is supposed to be and what to do when he gets there,” Hopewell said.

Hopewell said when he played UK basically “just lined up and tried to blow you off the football,” but now Jackson has to talk more to let other linemen know what the defense might be doing.

“Defenses back then would stunt and try a twist or two, but nothing like now and that’s why Drake has to do such a great job calling out those formations,” Hopewell said. “It’s just part of what makes him such a great center.”

Kentucky freshman guard Terrence Clarke continues to up the anticipation that UK fans have to see him play because of all the praise he gets from national recruiting analysts and college basketball analysts.

However, Clarke certainly seems to have the tools — on and off the court — to handle the Big Blue spotlight coming his way.

“His ability to create separation from a defender is as good as anyone I have ever coached here. It is off the chart,” Jason Smith, Clarke’s coach at Brewster Academy in New Hampshire, said. “He needs to be a more consistent 3-point shooter, but his ability to create space is at the elite level.”

Clarke also understands what lies ahead at Kentucky.

“He’s going to Kentucky because of Coach Cal’s reputation, the school’s tradition, the proven history of putting guys in to the NBA that are successful, and to be around other high level players,” Smith said.

“If he had not wanted to play with or be around other high level players, he would not have come to Brewster. He’s not afraid to share the spotlight the way Cal likes his guys to do and he’ll listen and do what Cal tells him to do for the team and to get better.”

What about off the court?

“Terrence is a very charismatic young man. He has a million dollar smile that just lights up a room,” Smith said. “He gets along with everybody. Fans are going to love him.”

Some athletes are fast on a track but not nearly as fast on a football field. Dekel Crowdus is fast no matter where he’s running.

The Frederick Douglass senior receiver, who verbally committed to Kentucky in May, has been timed in 4.4 seconds in the 40-yard dash.

“He just plays fast on the field. He’s the kind of kid who can touch the ball five times and score five touchdowns,” Frederick Douglass coach Nathan McPeek said. “You can’t say that about a lot of guys who play, especially at the high school level. Just give it to him and he can score.”

Crowdus had added weight to his 5-10 frame and is now up to 170 pounds. McPeek said he needs more weight and strength at UK, but has just turned 17 years old and has added almost 15 pounds in the last year.

“He is a hard kid to get a good shot on,” the Frederick Douglass coach said. “He maneuvers his body to where he does not take a lot of shots.”

His coach believes Crowdus’s ball skills are vastly underrated by many.

“He can catch any ball within the radius of his body. He can contort his body to make catches that you don’t think he can make,” McPeek said. “He’s not a big receiver but his ability to contort his body and go get balls on imperfect throws is remarkable.

“I remember a few times a ball was above head to the left or right and he would contort body enough to get the ball. He is so flexible.”

McPeek said Crowdus is not afraid of physical play, either.

“He can block. With maturity and strength he will get better, too,” McPeek said. “He could be good corner or safety if that was all he did because of his athletic ability. He’s not shy about contact. He’ll hit you because he’s very, very competitive.”

Crowdus had 22 scholarship offers and a top 10 of Ohio State, Baylor, Michigan, Oklahoma, South Carolina, Texas, Virginia Tech, Mississippi and Louisville along with Kentucky. He is ranked among the nation’s top 250 players overall and a top 50 wide receiver in the 2021 recruiting class.

He transferred to IMG Academy in Florida for his junior season but returned to Lexington in February for his senior season.

Kentucky will not start its football season now until Sept. 26 and will be playing 10 Southeastern Conference games. Athletics director Mitch Barnhart says the Cats are still taking extra precautions to make sure the team is ready to play then.

Barnhart explained to the Lexington Rotary Club last week that quarterbacks do not meet together in person to prevent a virus outbreak that could sideline them all. Other positions are doing the same.

“It’s a different dynamic. I think it’s hard to build a team through that. It’s really hard to stay connected, and those are things that the best teams are.”

Quote of the Week: “His spirit is something that jumps out at you. The kid is not going to be afraid. Playing that position at Kentucky, you can’t be scared and play for Calipari,” Kentucky assistant coach Joel Justus on what he likes best about transfer Creighton point guard Davion Mintz.

Quote of the Week 2: “I do understand. Doesn’t mean I have to really like it. I look at it as a respect. Someone don’t want to play us, they play someone else in your league. I don’t look at the negatives, I look at the positives. There’s no bad feelings with it. I didn’t take it personal and hopefully in the future we can find a way to play a game,” Western Kentucky coach Rick Stansbury on UK not scheduling his team.

Quote of the Week 3: “They are four elite level skilled players. Their skills are as good as anybody across the country. It’s just hard to find four player who can do all the things they can do,” Kentucky volleyball coach Craig Skinner on returning players Madison Lilley, Gabby Curry, Avery Skinner and Ali Stumler.