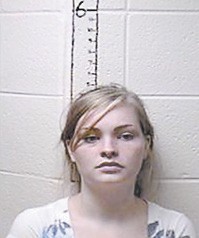 A Letcher County Jail inmate was charged with third-degree assault after she allegedly injured a deputy jailer.

The deputy jailers pulled Brock off of Smith and had control of her arms, but when Joseph Pease grabbed Brock’s ankles she used the back of her head to hit Lisa Pease in the mouth, the citation says.

Lisa Pease received cuts to her gums and had private property valued at more than $400 destroyed during the attack, the citation says.