Jail inmates being trained for mine jobs 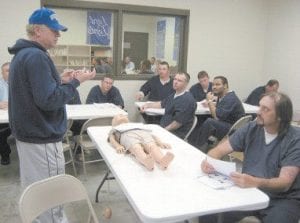 Southeast Community and Technical College instructor Terry Gilliam teaches inmates in the Harlan County jail the ins and outs of coal mining. By completing courses in the jail, the inmates will be certified as coal miners when they’re released, qualifying them for jobs that can pay in excess of $50,000 a year. (AP Photo/Roger Alford)

Jerry Elliott hopes to trade his jail jumpsuit and slippers for a hardhat and work boots when he comes up for parole later this year.

Mining is one of the few bright spots in Kentucky’s otherwise dismal economy, and with coal prices high, officials have picked an unusual classroom — a county jail — to teach potential miners a dangerous, difficult job.

Elliott and about 20 other inmates at the Harlan County Detention Center crowd into a drab, locked room each Wednesday to learn the ins and outs of the mining industry, which employs 17,000 in Kentucky.

Their goal? Land lucrative jobs in the Appalachian coalfields, where hardy workers are in high demand.

“I’ve learned you can’t prosper from bad money,” said Elliott, who is serving time for drug trafficking. “An honest living, that’s the only life. ” Paul Matney, human resources director for Kentucky-based TECO Coal Corp., said his company already counts some ex-cons among its 1,200 employees and wouldn’t rule out hiring more.

“You have to look at everyone as individuals,” Matney said. “You don’t just wholesale not consider applicants because they have a criminal record.”

After three years behind bars, coal mining looks pretty good to Elliott. He and the others, felons classified as low-risk and imprisoned mostly for drug crimes, listen wide-eyed as Southeast Community and Technical College mining instructor Terry Gilliam teaches them the basics, from first aid to safety rules.

The unlikely students, some heavily tattooed, most in their 20s and 30s, scribble notes. Even after five hours on metal folding chairs, all eyes are on Gilliam as he glides his fingers along the spine of a mannequin to show how to check for broken vertebra.

Such skills are crucial in a hazardous workplace, and the information will be part of a test they must pass to even be considered. The weekly classes will give them the initial state certification required to apply for jobs in the mining industry, which employs more than 80,000 people nationwide.

“This is not your career goal,” Gilliam said as he looked around at the concrete walls of a jail shadowed by the towering Black Mountain, Kentucky’s tallest peak. “This is not what you set out in life to do. You just made a bad decision and got deterred. Now, you’ve got to get back on track.”

Harlan County Jailer Curtis Stallard persuaded the college to offer the miner training and said he will serve as a reference for those who complete it.

“These guys are not rapists, murderers or hardened criminals,” Stallard said. “They’re people who have taken wrong turns in life. People who need a second chance. And I believe this will provide them that chance.”

Kentucky Coal Association President Bill Caylor expects some mine managers will be more open than others to giving the inmates a second chance.

“It’s a fascinating concept,” he said.

But he and Matney warn the industry shows signs of slowing, despite the job gains of the past year. They said the ailing economy may ultimately prove a tougher challenge than criminal convictions for inmates who want mining jobs.

Still, Gilliam hopes for the best.

“Most employers would rather hire someone without a criminal record, but if these guys don’t give up, and they show they want the jobs, someone will give them a second chance,” he said.

Stallard believes coal operators will tap his work force if they review the training program, which includes other jobs such as growing food, mowing baseball fields, picking up trash on highways and caring for cemeteries.

“We work these guys, and anyone who sees them out will tell you they’re really hard workers,” Stallard said.

An addiction to the painkiller OxyContin landed inmate Robert Allen, a father of five, behind bars. He hopes the hazards that dissuade many others from seeking mining jobs will work to his advantage.

“That,” he said, “ought to improve our chances.”