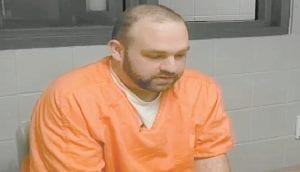 Accused killer James Ray Maggard is shown in this screen shot captured from a recording of an interview he did with Hazard’s WYMT-TV from the Letcher County Jail last week.

Accused murderer James Ray Maggard intended to use a hypodermic syringe and needle and a sharpened pencil as weapons in an escape from jail, a witness told Letcher District Judge Kevin Mullins.

Under questioning from Mullins during a hearing in district court, a deputy Letcher County jailer said Maggard planned to use the needle and pencil as “shanks” to help him overpower a guard and “try to force his way from the jail.”

Maggard, who his accused of murdering his lover’s husband in June, was charged with promoting contraband in the first degree after officials searched the cell Maggard was staying in on November 30 and found the needle and pencil.

Under Kentucky law, a person is guilty of promoting contraband in the first degree when he knowingly makes, obtains or possesses items that could be used as weapons. The charge is a Class D felony punishable by up to five years in prison.

The jail deputy, Jeff Mullins, also told Maggard’s attorney, public defender Bill Melton, that jail officials were acting on a tip from another prisoner when they searched the cell in which Maggard and 14 other inmates were staying. He said the needle was found “taped” under Maggard’s bunk with a sticky label peeled from a shampoo bottle. The deputy was not asked how Maggard obtained the illegal items.

The preliminary hearing was held to determine whether authorities had enough evidence against Maggard to refer the charges to the Letcher County Grand Jury for further action. Judge Mullins rule there is sufficient evidence and sent the case on to the grand jury.

Under questioning from Asst. Letcher Commonwealth’s Attorney Jenna Watts, Deputy Jailer Mullins said Maggard claimed to “know nothing about” the existence of the two potential weapons.

Maggard, 33, of Neon, has been confined to the jail since June 23, when he walked into the Letcher County Sheriff ’s Office and confessed to killing Dradrick “Drad” Fleming, an underground coal miner who was last seen alive outside a Neon church on the night of June 20.

Maggard, who is charged with capital murder, told police he was acting in self-defense when he beat Fleming unconscious and left him for dead near Franks Creek at Eolia. Maggard claims that Fleming assaulted him with a baseball bat when the two met on Pine Mountain to talk about Maggard’s relationship with Fleming’s wife, 30-year-old Stephanie Yvonne Jones Fleming. She is also charged with murder.

In a December 19 interview with Hazard’s WYMTTV, Maggard denied allegations that he set Fleming’s pickup truck afire before pushing it over a hillside on Black Mountain with Fleming’s body still inside.

“I didn’t set the truck on fire,” Maggard told WYMT reporter Rebekah Pewitt in an interview conducted in the Letcher County Jail. “I know for a fact I didn’t do that. ”

Maggard, who looked away from the camera for much of the interview, told Pewitt he is “not an evil person” and that he doesn’t know whether Fleming was dead or alive when he left him at Franks Creek.

Maggard said Fleming’s truck rolled over the hill after Maggard got out “to throw up.” He said he had “blacked out,” and “when I came to myself I was driving his truck.”

“I was going to park his truck where someone could find him,” Maggard told Pewitt. “I don’t know if I didn’t put the truck in park or left it in gear …”

Sheriff ’s department investigators believe that Maggard, who began dating Mrs. Fleming after the couple met while working at McDonald’s in Whitesburg, ambushed Drad Fleming near the Flemings’ home at Millstone. Maggard beat Fleming to death with the baseball bat, they have charged, before driving to the Eolia area to finish his plan to burn Fleming’s body and truck beyond recognition.

Stephanie Fleming, who authorities have accused of helping to plan and carry out her husband’s murder, also faces an added charge of promoting contraband in the county jail.

Mrs. Fleming was charged with a misdemeanor in September when authorities found her in possession of five bottles of a homemade alcoholic beverage known as “Gatorade wine” or “hooch.” She has also been in jail since June 23 after the sheriff ’s department accused her of taking cleaning supplies and a change of clothes to Maggard at Franks Creek and then giving him a ride back to Millstone after Drad Fleming’s body was burned.

A third person, 24-yearold Austin L. Ison of Pert Creek, is also charged with murder in the Drad Fleming case. Police say Ison helped to plan the murder and has withheld evidence necessary to the investigation.

Authorities believe Ison, who attended embalming school, helped Maggard and Stephanie determine what accelerant would be needed to burn a body so that the cause of death couldn’t be determined by forensic evidence.