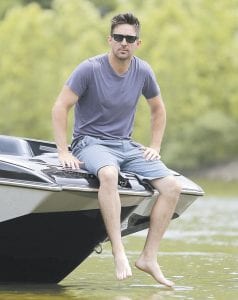 On a recent hot summer morning in Nashville, Tennessee, country singer Jake Owen steered his boat down a quiet stretch of the Cumberland River and kicked up a wave curl just perfect for one of his favorite sports: wake boarding.

After a few minutes, he slowed the boat down to video chat with his 3-yearold daughter, Pearl, who picked out the sparkly hot pink finish on his new boat.

If Owen seems to be living a dream right now, it has a lot to do with his determination to stay positive despite a tough year. Last year he and his wife, Lacey, announced their divorce after three years of marriage and she and his daughter moved out of their home in Nashville.

“Everything was new,” Owen, 34, said of the last year. “I was single. I had gone through the divorce. My child had moved back home to Florida. I just had a lot going on.”

Instead of writing a “divorce record” full of sad ballads and breakup songs like some would have expected, on his fifth record, “American Love,” Owen returned to the hopeful, light-hearted songs that make fans happy, and him, too.

Since his 2006 debut, Owen has made a name for himself with upbeat, up-tempo party songs like “Beachin’” or “Barefoot Blue Jean Night,” which came naturally to the athletic, sun-loving Florida-born singer.

Following the divorce, he threw himself into work and hit the road hard, sometimes just traveling without his band in an old Volkswagen van. He also started recording with new producers Ross Copperman, who has worked with Dierks Bentley, and Grammy winner Shane McAnally, who has written and produced for Sam Hunt and Kacey Musgraves.

“American Love,” which came out July 29, already has a Top 10 country hit with first single “American Country Love Song.” Owen shines in steel pedal simplicity on “LAX,” a California country song he co-wrote with Nathan Chapman and Andrew Dorff that uses the city of Los Angeles as a metaphor for a broken relationship. And he holds his own vocally on “If He Ain’t Gonna Love You,” in which powerhouse singer Chris Stapleton provides backup vocals.

For the first time in his career, he co-produced three of the album’s songs with his band’s guitar player, Lukas Bracewell, including the lynchpin song of the album, “Good Company,” a beachy jam with horns and steel drums. Surrounding yourself with good people and good tunes is good therapy, too, he said.

“I feel like melodically and musically that (song) really represents the way I feel,” Owen said.