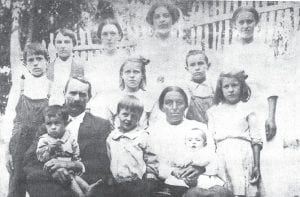 At top, James and Sarah Back Adams pose for a family photo with 11 of their 12 children outside their hillside home on Rockhouse Creek.

The James and Sarah Back Adams family celebrated their 70th family reunion on July 6. There were 131 family members present this year.

Our story begins with the marriage of James Adams and Sarah Back (known to us as Pop and Maw).

On a wooded hillside overlooking Rockhouse Creek, they began the task of building a home that they would occupy for the next 50 years.

From this rugged hillside they carved out the homestead which in the next half-century would have become a shrine in the hearts of all the family.

The first family reunion was held in 1949 at the homeplace. The following year it was moved to he Point, which is the final resting place of Pop and Maw. The reunion was held there until 1988 and then moved to Carr Fork Lake. In 2015 we moved indoors. 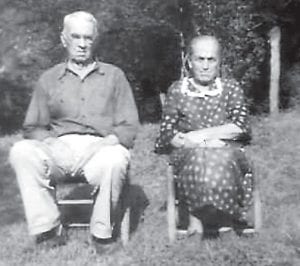 Memories from the past from the grandchildren’s perspective:

“It was so much fun in the summertime. The families would all gather at Pop and Maw’s in the evening. The old folks would visit and the children would play in the sawdust pile or play hide-n-seek or marbles in the side yard. In the winter when we had to go inside, Uncle Bill would tell us ghost stories. Maw would always have gingerbread and sometimes fried apple pies for us. At Christmastime we would draw names and sit together on Christmas Eve. We would play games, open gifts and eat. On Easter we would get together for a picnic and hide eggs.

“We had a wonderful childhood and we have many, many happy memories.”

Ninety-eight years have gone by since this family’s humble beginning in the mountains of eastern Kentucky. Members of the family are now scattered over a great portion of the United States. They were endowed with love, courage and devotion, all of which they have used as they entered nearly every field of human endeavor.