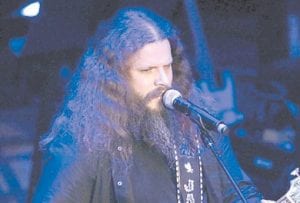 Hank Cochran was one of country music’s greatest songwriters. He was also an opportunist, something Jamey Johnson discovered when he met him at a mutual friend’s office several years ago.

“Hank was there, and as I was shaking his hand, Hank pulled out a CD of songs that had my name written on it,” Johnson said of the late music legend. “So I didn’t know I was going to meet Hank, but he sure enough knew he was going to meet me that day. He was a-planning on it, and right off the bat he was pitching me songs, and every time I saw him he was asking me to cut this one or cut that one.”

Johnson pays tribute to Cochran with the release this week of “Living for a Song: A Tribute to Hank Cochran,” a deep look at the songwriter’s career. Johnson teams up with stars like Willie Nelson, George Strait and Alison Krauss on what is mostly a duets album comprised of Cochran classics such as “Make the World Go Away” and “I Fall to Pieces.”

Co-produced by Cochran’s friends Buddy Cannon and Dale Dodson, the 16-track album also includes one Johnson solo song, “Would These Arms Be in Your Way.”

“He was pretty adamant about wanting me to cut that song,” Johnson said. “I hope we did it justice. I regret that Hank never got to hear it, but he did finally quit pitching me that song. He was relentless.”

The album cements the friendship of Johnson and Cochran in Nashville lore and represents another creative left turn for the fiercely independent 37-year-old Alabama singer-songwriter. Johnson sang at Cochran’s bedside the night he died of pancreatic cancer in 2010 at age 74.

He carried that tribute a step further by making a rare modern example of a country performer saluting a songwriter’s body of work. Once a fairly regular staple in Nashville — one of his favorites is Waylon Jennings’ tribute to Harlan Howard, “Waylon sings Ol’ Harlan” — they’ve pretty much disappeared.

Johnson could think of no better reason to bring them back.

“There’s not a writer I think any more deserving than Hank Cochran to have an album done in the way that we did this one,” Johnson said. “And the icing on the cake was the artists that stepped up and not only agreed to do it, but we were getting death threats from artists if we didn’t put them on this album, you know? There would be hell to pay and we wasn’t gonna have that.”

Johnson cut two tracks with good friend Nelson, who got his first paying job in Nashville thanks to Cochran, and other iconic sing ers like Merle Haggard, Ray Price, Vince Gill, Bobby Bare and Kris Kristofferson. But he said the most powerful experiences for him were the songs he sang with Krauss, Emmylou Harris and Lee Ann Womack — “humbled is the word that comes to mind,” he said.

Krauss joined him on “The Late Show With David Letterman” last week to sing “Make the World Go Away,” taking his tribute to the masses. He wants to spread the gospel to as many as he can.

“Oh, Hank was a lot of trouble, a lot of fun, a lot of everything,” Johnson said. “I’m very grateful to have gotten to know him. There won’t be another one. God only makes one of those.”