“If you can create an environment in which the public expects more, all the cogs in life as we know it will fall into place,” —Jamie Oliver, host “Food Revolution” 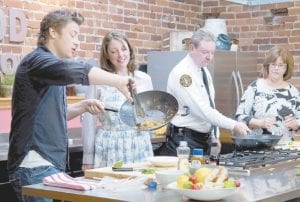 While Oliver’s effort to overhaul the diet of one West Virginia community unfolds on network television, the British celebrity chef also will be stumping for national reform with an online petition calling for better food in the country’s schools.

Watching “Jamie Oliver’s Food Revolution” should make people angry about the state of the American food system, Oliver said in an interview Thursday. And he hopes the ABC reality series moves people to channel that anger for change.

“If you can create an environment in which the public expects more, all the cogs in life as we know it fall into place,” he said.

Once the series (which premiers with a 2-hour episode Friday) ends its run on April 23, Oliver plans to take the petition to the White House, where first lady Michelle Obama has made reducing childhood obesity a priority.

Despite the sometimes chilly reception he got from Huntington locals in early episodes of the series, Oliver said he is convinced this is the right time for a food revolution in the United States.

“I’m starting to see a difference now in America t hat I ’ve never seen as a foreigner in 12 years,” he said, noting a confluence of pressures for re- form from the White House, Congress, industry, health and parent groups.

By Thursday afternoon, about 50,000 people had signed on to Oliver’s petition, which was launched in early March.

Oliver’s series airs as Congress considers legislation to toughen the rules that regulate the nation’s school lunches. The measure would create new standards for all foods in schools, including vending machine items.

The series is based on a similar program Oliver did in England that did result in reform of school food. The American version is set in a town the network calls the nation’s unhealthiest city.

That designation is based on a 2008 Associated Press story that used federal Centers for Disease Control and Prevention data to dub the five-county Huntington metropolitan area the country’s unhealthiest.

The story pointed out that based on CDC statistics, nearly half the adults in the metropolitan area were obese and that the area led in a half-dozen other illness measures, too, including heart disease and diabetes.

That didn’t make it any easier for the community to swallow Oliver’s made-for- TV change-your-diet-or-die message.

“We don’t want to sit around and eat lettuce all day,” local radio DJ Rod Willis told Oliver when the chef appeared on his radio show during the first episode. “You come to town and you say you’re going to change our menus and all that. I just don’t think you should come in here and tell us what to do.”

Though he was clearly taken aback during the filming, Oliver said Thursday the reaction was expected.

“The reception is always fairly icy when you go someplace and want to promote change,” he said. “I knew it was going to be hard and certainly the first month was pretty tough.”

But Oliver says it definitely got better. “After four, four and a half months, it was a love fest.”

In the series, Oliver wrestles with school food bureaucracy as he struggles to replace the menu of processed foods with fresh, does a diet makeover for an obese family that was living on frozen pizzas and junk food, and opens a storefront cooking school to teach basic kitchen skills and healthy recipes.

Still to be seen is what happens now that the cameras are gone.

State officials have questioned whether the experiment can be replicated elsewhere. And officials have said food and labor costs already are higher at the existing program.

Oliver doesn’t buy it. He says some of those extra costs are debatable. “As far as my experts are concerned, and frankly I trust them more than what’s happening down there, they’re saying the food actually is coming out the same (cost).”

He acknowledges labor costs for working with fresh food is higher. And he argues it’s worth it.

“This is the true cost of feeding your children,” he said. “You’ve been living in a fallacy for the last 30 years. Of course when you reheat and regenerate preportioned and pre-prepared processed rubbish, of course its cheaper and easier. It’s airplane food. So under the circumstances, our numbers are coming out really good.”