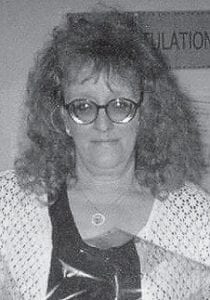 Jane Harvey McKinney Harris, 56, died April 9 at her home at Morehead after an illness of several weeks.

Born in West Liberty, she was a daughter of the late Chester and Beatrice Fugett Harvey.

Mrs. Harris was a CMA/CNA and worked at the Life Care Center for 29 years. She received her bachelor’s degree in sociology from Morehead State University and also attended Lees Junior College. She was a member of the Hayes Branch Community Church.

She was married to the late Larry Joe McKinney and after his death married Ricky Harris, who survives her. She was the mother of the late Ryan Matthew McKinney.

Funeral services were held April 12 in Morehead. Burial was in the Trumbo Hill Cemetery.