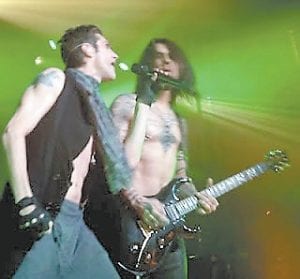 As concertgoers walked into the Louisville Palace to see the rock band Jane’s Addiction, it seemed as if they were walking through a time portal, sending them into an underground music club one would see in the 1920’s. With flappers dancing in every corner as well as other vintage delights the attendees were never bored as they waited to be seated.

Jane’s Addiction formed in 1985 and found fame playing shows on the Los Angeles club scene. With their unique sound and daring antics, the band quickly gained popularity. They helped jumpstart the alternative movement of the 1990’s, but called it quits in 1991 after three successful albums. Their farewell tour was joined by several other bands and called Lollapalooza. The tour drew record-breaking crowds and later became a music festival that is still held every year in Chicago.

Jane’s Addiction reunited for another album in 2004 but, once again, threw in the towel, after releasing an album the same year. The band reunited for a third time in 2008 and after a brief tour began working on their latest ground breaking album, “The Great Escape Artist.” The album mixed Jane’s signature sound with some vintage influences.

After the release of “The Great Escape Artist” the band hit the road once again, with one of its recent stops in Louisville on March 23. Jane’s Addiction brought with them to the Falls City Brussels’ very own Black Box Revelation to warm up the crowd. Though the band has not gained much recognition in North America, they hit the stage with confidence that said otherwise. With drumming reminiscent of Depeche Mode and vocals similar to The Smashing Pumpkins, the band’s familiar aspects seemed to really resonate with the crowd, having them up on their feet during the first song. The band played a few songs then exited the stage, leaving the audience even more excited for Jane’s Addiction.

Soon after the openers left the stage, Jane’s stage was set up. With large wooden sculptures of two women at center stage, as well the band’s instruments, the audience could tell that this show would be filled with the band’s signature theatrics. This became ever so apparent when the lights dimmed and one swing dropped from each side of the stage. Then the silhouettes of the band’s backup dancers were visible, as they stoically sat on the swings and were raised high above the stage. After this, music began to play and the dancers began to eerily swing while their elongated skirts swept the stage floor. When they finally took their places onstage, the band members began to play as lights burst on. The crowd roared with applause as Jane’s Addiction began to play, beginning with their latest song “Underground” and continuing through the night. Their theatrics never slowed down.

After playing several of their most popular songs such as “Mountain Song,” “ Been Caught Stealing,” and “Ted, Just Admit It,” the theatrics reached an all time high when Jane’s Addiction began to play “Twisted Tales.” During this song a man in all white, sporting a mask and charring a pillowcase walked across the stage. As singer Perry Farrell belted out the song’s chorus, with wife and backup dancer Etty Farrell providing background vocals, the masked figure acted out an unusual skit that ended in his hanging above the stage as the song ended. After this, the band continued making it clear why they are considered legends in the music scene. All four members — Farrell (vocals), Dave Navarro (guitar), Stephen Perkins (drums) and Chris Chaney ( bass) — played each song with the ease of master musicians.

After playing several more songs including “Jane Says,” “Irresistible Force,” and “Stop!” the band exited the stage and came back for the encore that included “Words Right Out Of My Mouth” and “Pigs in Zen.” When the two songs ended, Jane’s Addiction took their final bow and exited the stage as every attendee erupted in wild applause.

This show made it clear why the band members came back for more after so many breakups. Because their band was so powerful and moved so many people, it was impossible to walk away from and their performance at the Louisville Palace did nothing but strengthen that fact.

Cassidy and Kennedy Breeding attend Letcher County Central High School, were they are about to complete their freshman year.