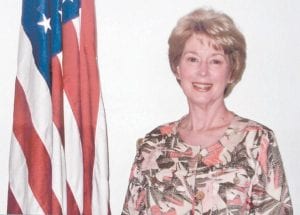 Whitesburg resident Janie Frazier has put nearly 800,000 miles on seven vehicles, including a red Jeep, a white Jeep and a blue Jeep, while driving to work each day at the Social Security office in Hazard. Mrs. Frazier is retiring after 40 years on the job.

Janie Frazier is retiring after working at the Social Security Office in Hazard for the last 40 years.

“I really enjoyed being a public servant,” said Frazier. “I tried to help everybody I could regardless of where they lived, but I was partial to Letcher County.”

Frazier said she followed rules and regulations and couldn’t always give people what they wanted.

Frazier put in an application with the government agency right after she was graduated from Berea College where she majored in history. Six months later, she was hired as a claims representative in March of 1973.

Frazier attended an eightweek class in Lexington and didn’t know where her placement would be. She requested the Hazard location, which was the site no one else in her class wanted.

“They all sighed with relief,” she said.

Most job candidates fresh out of college want to go to cities, she said.

“It was just remote and in the mountains,” said Frazier. “It was home.”

Frazier said it is rare to have stayed in the same office for as many years as she has because usually a manager will have had to travel before being assigned to the location of their choice.

Her high school sweetheart, Doug Frazier, lived in Whitesburg and she wanted to be closer to him. The Fraziers have been married for 38 years. Doug Frazier has been retired since selling Frazier’s Farmer Supply to Whitesburg pharmacist Ernie Watts.

“I’ve been with Social Security longer than I have with Doug,” said Frazier.

She worked as a claims representative for seven years. Then she was an operation supervisor for eights years. After being an assistant manager for seven years, she has spent the last 19 years as a manager.

“I bought into the mission very early,” said Frazier. “I think it is a really good program myself.”

She said because Social Security is mandatory, it sometimes is the only retirement people have.

“You put the money away for some day,” said Frazier. “Not everybody agrees with that.”

“People depend on it,” said Frazier. “ You probably don’t understand until you need it.”

She said technology has changed how work is now done at the Hazard office. “You can do almost anything online and not go to an office,” said Frazier. “I like to do it face to face or by phone.”

Disability claims and retirement claims have increased lately, she said.

Because no one has been hired at the Hazard office in three years, Frazier said electronic services help employees manage the caseload easier.

“This is a welcome to us for people to do business online,” she said. “You can keep up with it online, track it and see what stage your claim is in.”

Now that Frazier is retiring, she no longer will have to get out of bed in Whitesburg at 5 a.m. and be on the road to Hazard by 6 a.m., as she has done for the past four decades.

She has put 796,000 miles on seven vehicles including a red Jeep, a white Jeep and a blue Jeep.

“I liked to open the office, get the coffee started and the computers going,” said Frazier. “For the next six months, I am going to switch off the alarm clock and go back to sleep.”

The Fraziers purchased a retirement home in Florida about three years ago. Frazier said she hadn’t spent much time there, but will now that she is retired.

She isn’t sure what she will do in her spare time.

“I love to read,” she said. “I can’t tell you that I won’t find a part-time job. I love people. I love volunteering.

Frazier said she struggled with the idea of retiring.

“I really liked my job,” she said. “I wouldn’t have cared to go on and do it forever. I can’t say every day has been a bunch of roses.”

Frazier said she is now looking forward to spending more time with her family.