‘Jared’ impressed with design of new Subway restaurant at Isom 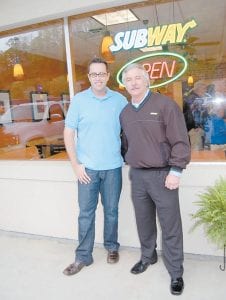 Archie Everage, owner of eight Subway restaurants in eastern Kentucky, posed for a photo with Jared Fogle, “The Subway Guy”, in front of his new store at Isom on April 26.

The new Subway restaurant in Isom is a unique, spacious store. Even Jared Fogle, who is also known as the “Subway Guy,” agrees.

“I have been in about 1,000 Subway stores and I have never seen one like this,” said Fogle, of Indianapolis, Ind. “It’s just a very comfortable store.”

Archie Everage, owner of eight Subway restaurants in eastern Kentucky, opted for extra upgrades to his new store including leather lounge chairs and a meeting room.

“I’ve never seen this at a Subway,” said Fogle. “It’s pretty exciting. It’s a great addition. Hopefully the community will embrace it.”

Everage, of Hindman, said he is excited about the new store located in the Isom Plaza, which makes the 200th store in the Kentucky region, which consists of all Subway stores east of Bowling Green.

“It has the latest décor,” said Everage. “You won’t find one decorated any better.”

Everage said business was consistently busy April 26 for the grand opening of the store.

“Since 7 o’clock this morning there has been at least a customer in line every minute of the day,” he said. “The response has been phenomenal.”

Fogle, 32, lost a signifi- cant amount of weight after going on a “Subway diet” in the late 1990’s, and became a star after the restaurant chain began featuring him in its television commercials in 2000.