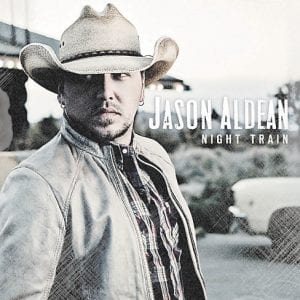 This CD cover released by Broken Bow Records shows the coming album “Night Train” by Jason Aldean. The album will be released on Oct. 16.

When Jason Aldean names an album, he looks for a title that fits his life at the moment.

He thinks “Night Train,” his choice for his much anticipated fifth album, paints the perfect picture.

“It’s one of those things where we went from one bus pulling a trailer to all the sudden we’ve got six or seven buses and eight or nine trucks,” Aldean said. “We’re all rolling down the interstate together at night, and that’s what it looks like. It looks like a big freight train rolling down the interstate. It just kind of to me sums up how far things have come over the last few years.”

Aldean spoke about the new album, out Oct. 16 on Broken Bow Records, just days after playing his first stadium show, the next step on his way to country superstar status. He’s sold 1.9 million concert tickets this year and his last album, the multiplatinum “My Kinda Party,” produced five hit singles, won the Country Music Association’s Album of the Year award and has remained in Billboard’s country top 10 for 92 weeks.

“Night Train” appears set to follow right down the tracks. “Take a Little Ride,” the first single from the album, set a record for firstweek digital downloads by a male country solo artist.

“ My Kinda Party” helped change the way fans perceive the Georgia native. Hits like the rapinfused “Dirt Road Anthem” and the Kelly Clarkson duet “Don’t You Wanna Stay” played to Aldean’s fan base, but also helped expand the crowd gathering around the stage.

“Night Train” will offer a few different flavors as well, including an appearance by Luke Bryan and Eric Church on “The Only Way I Know.”

“I think (it’s) going to be a really big highlight on the record,” Aldean said. “And then we’ve got a song on here that’s called ‘1994’ that is really unlike anything I’ve ever cut before. … The object is to have people rolling on the floor laughing when they hear this thing for the first time. So it’s almost like taking a little trip, a ride back to 1994 and some things that went on back then.”