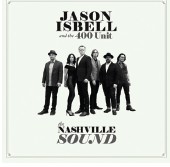 Jason Isbell and the 400 Unit, “The Nashville Sound” (Southeastern/Thirty Tigers)

But when the writer is Jason Isbell, arguably the finest songwriter putting pen to paper these days, the song changes tempo and builds to an angsty, gnarling crescendo, all in unspoken support of lyrics about being anxious when you should be happy.

It’s not the best song on “The Nashville Sound,” the new album Isbell produced with his old band, the 400 Unit, but it shows what a craftsman he has become.

Following “Southeastern” and “Something More Than Free,” two masterworks that have grown in stature since their release in 2013 and 2015, “The Nashville Sound” doesn’t always rise to Isbell’s standards. An angry song called “White Man’s World,” for example — likely Isbell’s take on post-2016 election America — lacks his usual flair for nuanced, show-don’t-tell lyrics.

But the album has its moments.

The opener, “Last of My Kind,” is an evocative reflection on losing touch with the past. A wistful love song called “If We Were Vampires” rivals Isbell’s best work. So does the emphatic, optimistic anthem, “Hope the High Road,” the album’s first single.

The 400 Unit is in fine form throughout, rocking when Isbell snarls and hanging back in songs that demand restraint.

So even if the album is not as consistently transcendent as the last two, that’s a high bar — and nothing here will harm Isbell’s soaring reputation.