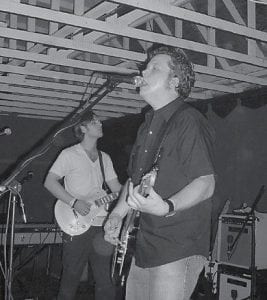 TO PERFORM HERE – Jason Isbell is photographed here peforming with his band “400 Unit” recently at the Grey Eagle in Asheville, N.C. Isbell will visit Whitesburg on September 28.

In 2001, the Drive-By Truckers started making waves with their independently-released double album, Southern Rock Opera. Four-star reviews from the critics, “Band of the Year” claims, and major-label interest followed.

Shortly thereafter, a line-up change occurred and a 23-yearold guitarist and songwriter from Alabama named Jason Isbell was asked to join the band. That collaboration produced some of the finest songs in the Drive-By Truckers’ catalog, and the next three albums – Decoration Day (2003), The Dirty South (2004), and A Blessing and A Curse (2006) – were considered by many to be the band’s finest efforts.

In April of this year, Isbell announced he was leaving the band. Although his departure has been labeled as “amicable,” many believe it to be otherwise. Regardless, Isbell’s claims that he and the band are still in good graces may be proven by the fact that most of the musicians who appear on his first solo album, Sirens of the Ditch, are his former band mates. The new release is full of bluesy, full-on jams, punk-laden rockers, poignant ballads and southerntinged memories, is as good an album as any of the Truckers’ previous releases, and shows exactly why Isbell’s songs were so revered by DBT fans.

So, going into Isbell’s recent concert at the quaint Grey Eagle Tavern, a self-described “listening room-style concert venue” in Asheville, N.C., expectations were high. The crowd, mostly college-age or older, got to see Isbell pull double duty this night. Surprisingly, he sat in with the opening act, Centromatic of Denton, Texas, for an hour of eclectic, lo-fiindie rock. Centromatic’s set was great, and Isbell’s popularity didn’t distract from the performance.

When Isbell finally came out with his band, the 400 Unit, the crowd of a few hundred roared its approval. Isbell is a great front man who displays passion, confidence and humility. He appeared grateful to his audience and often spoke to or made contact with those in front of him.

Isbell’s voice (something that really made his time with the Truckers distinct), is effortless, yet at the same time is seasoned beyond his 28 years. It’s a voice you don’t easily forget.

The set list from the August 28 show was as much Drive-By Truckers greatest hits as it was a showcase for the new album. With nine songs from Sirens of the Ditch, seven DBT classics (including “Outfit,” “Decoration Day,” and “Danko/Manuel”), a track from DBT lead singer and songwriter Patterson Hood’s solo album, and a cover of “Psycho Killer” by the Talking Heads, the evening was a delight for anyone in attendance.

The music rocked, the crowd danced, the band was intense, and Isbell showed he is much more than just a former sideman in a three-singer, three-guitar rock band. He proved that he is a powerful singer, an amazing guitarist, and an exceptional front man in his own right.

Maybe it’s because of Isbell’s southern roots or maybe it’s just his humility, but at the end of the second encore he shook hands and interacted with anyone wishing to respond and made sure that people knew that he appreciated their support. That’s a real front man in my book.

Overall, an Isbell concert is a pleasant experience that should not be missed.