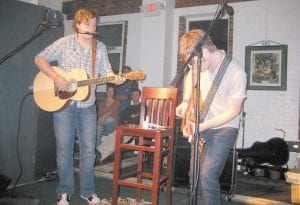 Build it and they will come to Letcher County – from Washington, D.C., from Columbus, Ohio, from Asheville, N.C., and from Nashville, Tenn.

Those are just a few of the out-of-county locations – Lexington and nearby southeastern Kentucky counties were also well represented – where tickets were sold to people who came to Whitesburg on March 22 for a concert by rocker Jason Isbell.

Judging by the comments heard from a sampling of the sold-out crowd of more than 100, neither Isbell nor the venue in which he played, Summit City on Main Street, left anyone disappointed.

“This has restored my faith in rock and roll,” concert-goer Billy Hylton remarked about halfway through Isbell’s show. Hylton was visiting Letcher County from Chapel Hill, N.C.

Billed as “An Evening with Jason Isbell,” the show was the last of nine “acoustic” performances held before Isbell, a former member of the Drive-By Truckers, and his new band, the 400 Unit, left the U.S. for a European tour that will kick off Friday in Limerick, Ireland and end on April 30 in Bergen, Spain.

Isbell was accompanied to Whitesburg by fellow 400 Unit guitarist Browan Lollar. Although a two-hour delay in traffic and making a wrong turn on the way from Raleigh, N.C., left them arriving in Whitesburg just minutes before they were scheduled to take the stage, neither of the two northern Alabama natives seemed worse for the wear.

In opening the show with “. . . damn Lonely Love,” one of four outstanding songs Isbell contributed to the Drive-By Truckers’ 2004 album The Dirty South, Isbell and Lollar let it be known that much of this show would be acoustic in name only.

After moving through “The Magician,” “Chicago Promenade,” and “Grown,” all from Isbell’s stellar solo debut album, Sirens of the Ditch, the two performed the truly acoustic “Thank God for the TVA,” an unreleased song in which Isbell uses old family stories to describe the Tennessee Valley Authority’s impact on the people of northern Alabama after the Great Depression.

With “Try,” another fine song from Sirens of the Ditch that worked surprisingly well in acoustic form, and “Danko/ Manuel,” an ode to the late Rick Danko and Richard Manuel (both members of The Band) from The Dirty South, Isbell and Lollar appeared determined to prove that just because you’re playing an acoustic guitar doesn’t mean you can’t rock.

And rock they did, with Isbell and Lollar seemingly attacking their guitars, often in ways not unlike Pete Townshend of The Who, as they romped through covers of Patterson Hood’s “The Assassin” and Ray LaMontagne’s “Jolene,” along with Isbell’s own “In a Razor Town” from Sirens.

Those who thought the show couldn’t get any better after the first set ended with “Outfit,” a Drive-By Truckers’ song Isbell said he wrote for his dad on Father’s Day, and the title track of the album from which it came, “Decoration Day,” were quickly proven wrong when Isbell began the second set with an outstanding cover of Bob Dylan’s “It’s All Over Now, Baby Blue.”

When the legendary Allman Brothers Band hits on all cylinders in concert, its members like to say they were “hittin’ the note.” That phrase is the only one suitable to describe the duo’s cover of The Talking Heads’ classic “Psycho Killer,” sung by Lollar, and the last four songs they performed to bring the show to an end – “Dress Blues” and “Hurricanes and Hand Grenades” from Sirens, the FM radio hit “Never Gonna Change” from The Dirty South, and their encore cover of “Sway,” from The Rolling Stones’ 1971 classic album Sticky Fingers.

After the show’s conclusion, Isbell and Lollar spent several minutes posing for pictures and talking with members of the audience who stayed around.

The concert marked the second time Isbell and Lollar have performed at Summit City. Both men praised the Whitesburg audience as being one of its most appreciative ever. And both promised to come back if invited.